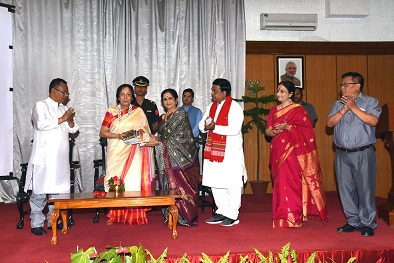 In presence of the members of general council, Sangeet Natak Akademi (SNA), New Delhi a 30-minute special screening of film on Raas Leela and releasing of DVD of five types of Raas Leela of Manipur were held at Durban Hall, Raj Bhavan on Saturday evening.

At the outset of the programme Governor Dr Najma Heptulla released DVD of five types Raas Leela of Manipur.

Addressing the gathering, Dr Heptulla expressed her gratitude to the SNA for their decision to hold a general council meeting in Imphal. She further stated that Manipur University has emerged as one of the most important and active universities of culture in the country.

We need to preserve and promote the art, craft, culture, music and literature. Though Manipur is a tiny state it has so much cultural wealth which needs to be promoted and to preserved, she said. There are many more unique things in Manipur like the Ima Kaithal or the world’s only market run by womenfolk or the Loktak Lake the largest lake in the North East, the Governor added.

Art and Culture minister Jayantakumar Singh said Manipur has a very rich cultural heritage. He also lauded the SNA for playing an important role in promotion of Culture in the country. SNA Chairman Shekhar Sen said Sangeet Natak Akademi and JNMDA have deep relations for the past 62 years.

Later, a 30-minute film on Raas Leela was screened. The film was taken up as special documentations on various performing arts of the country under the SNA New Delhi initiative. Under this programme, documentation and compilation of five kinds of Raas Leela of Manipur (Maharaas, Vasanta Raas, Nitya Raas, Kunja Raas and Diba Raas) have been taken up and completed recently with the artistic support from JNMDA. The special documentation has been directed by internationally acclaimed film maker A Shyam Sharma.

The programme was attended by members of executive board and general council of SNA and officials of JNMDA including its vice chairman Prof H Tombi Singh.