The Manipur government has withdrawn its earlier order asking NGOs not to open camps to provide food and shelter to Myanmarese nationals, who sneaked into Manipur due to military atrocities in the neighbouring country.

The notification has been issued to the deputy commissioners of Chandel, Tengnoupal, Kamjong, Ukhrul and Churachandpur districts in Manipur.

In the notification to the respective DCs, the special secretary to the home department of Manipur, Prakash said: “Kindly invite a reference to this department’s letter of even No. dated 26.03.2021 on the above subject.” 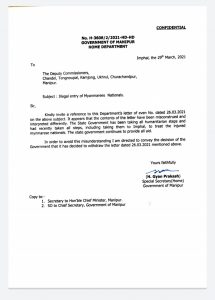 “The State Government has been taking all humanitarian steps and had recently taken all steps, including taking them to Imphal, to treat the injured Mynmarese nationals. The state government continues to provide all aid,” Prakash clarified.

“In order to avoid this misunderstanding, I am directed to convey the decision of the Government that it has decided to withdraw the letter dated 26.03.2021 mentioned above,” Prakash added.

In the earlier order to the Chandel, Tengnoupal, Kamjong, Ukhrul and Churachandpur districts, issued on March 26, 2021, Prakash had said:, “As a fallout of the events taking place in the neighbouring country, Myanmar, it is reported that the country’s nationals have been trying to enter India through the border states including Manipur.”

“In this regard, I am directed to request you to kindly take the following colons: i) District administration should not open any camps to provide food and shelter; ii) The civil society organisations also should not be allowed to open any camps to provide shelter/ food; iii) In case of grievous injuries, medical attention may be provided on humanitarian considerations; iv) People trying to enter/seek refuge should be politely turned away; V) Aadhar enrolment should be stopped immediately and Aadhar enrolment kits taken into safe custody,” the letter said.

The respective DCs were asked to submit a report on action taken by March 30, 2021.

The BJP-led Manipur government issued the earlier order following an advisory of the Union home ministry on the issue.

The Ministry of Home Affairs (MHA) in its advisory directed four Northeastern states, including Mizoram and Manipur, to check the illegal influx of people from Myanmar and to immediately initiate the deportation process of illegal migrants.