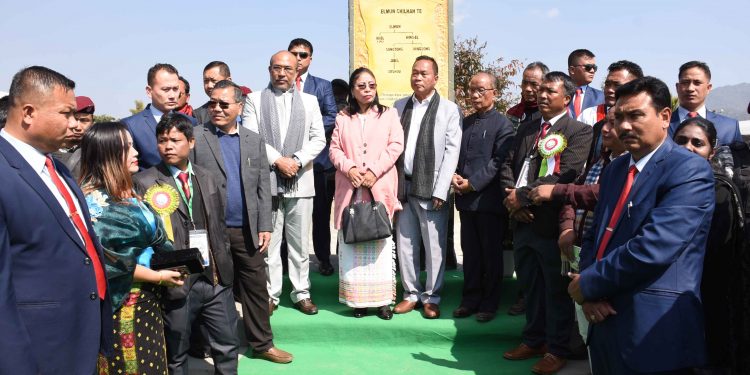 The first general conference of Elmun clan of Thadou community was held at L S playground, Motbung in Manipur’s Kangpokpi district on Tuesday.

Speaking on the occasion, N Biren lauded the Elmun people for building up unity among them by organizing such a general conference.

Stating that it would encourage the sense of brotherhood and unity among people of other communities as well, Biren opined that the world keeps only those groups in high esteem who understand their origin and respect their ancestors.

Urging the people to march ahead towards development through peace and unity, he pointed out that disintegration would never bring anything positive but would only hinder progress.

He also added that is the reason why the present State Government has been focussing on promoting mutual understanding, respect and brotherhood from day one.

He said the ‘Go to Hills’ and the ‘Go to Village’ missions had brought many positive changes in the State and many unreached areas had been reached while many ignored and sidelined needy people had been benefitted.

As such, Phase-II of the ‘Go to Village’ mission would commence soon, he announced.

Expressing serious concern over the felling of trees, he appealed to the people of hill districts to stop Jhum and shifting cultivation.

Stating that most of the streams are now parched during dry season, he expressed worry that there would be no water for consumption in future if the current practice continues.

He also said that rivers and Loktak Lake are also becoming shallow day by day due to heavy siltation.

Maintaining that there is urgent need to conserve forest to save the State from the effects of global climate change, he stated that the state government is ever ready to provide alternative livelihood to replace the occupation of cutting trees and Jhum cultivation.

Mentioning about various developmental works taken up by the State Government, he said that construction of transit accommodations for doctors and teachers currently underway at 90 different blocks are nearing completion.

On his arrival at the conference venue, the chief minister also unveiled the ‘Brotherhood Monolith’ which was erected there to commemorate the event.

He later opened the conference by beating the traditional gong and hoisting the Elmun flag amidst laud cheers and applause.