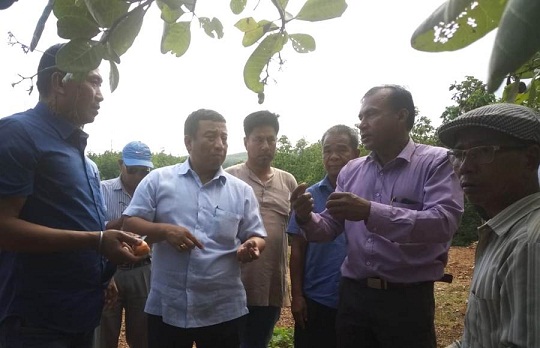 Manipur Forest and Environment Minister Thounaojam Shyamkumar on Friday appealed to the people of the state to cooperate with the departments to help in combating the issue of global warming.

Shyamkumar made the appeal while visiting the Holenphai and Teenumunjang villages under Tengnoupal district near the Indo-Myanmar border on Friday.

He said his departments have identified the locations where state-wide mass plantation drive will be held from the month of June, under the initiative of Chief Minister’s missions ‘Go To Village’ and ‘Go To Hills’. He said latest technology will be used to track the development of these plantations.

Minister further said the drive will be video recorded and Geo Tracking System will be used to track progress of the plantations. Forest and Environment and Horticulture and Soil Conservation departments along with the villagers of different districts will collaborate for the mass plantation drive across the State.

He said he was hopeful that the mass plantation drive will be able to combat the issue global warming as well as meet the objectives of the state government’s ‘Go to Village’ and ‘Go to Hills’ missions. Acknowledging that the villagers depend on the forest produces, the departments have come up with the plan for the plantation drive to give an alternative way to earn for them.

He further said the Agar tree takes 7-8 years to mature and the farmers can earn up to Rs 50,000 to Rs 1.5 lakh per tree. Stating that his department will provide saplings for free, he said the farmers or villagers will also be rewarded for the maintenance of trees.