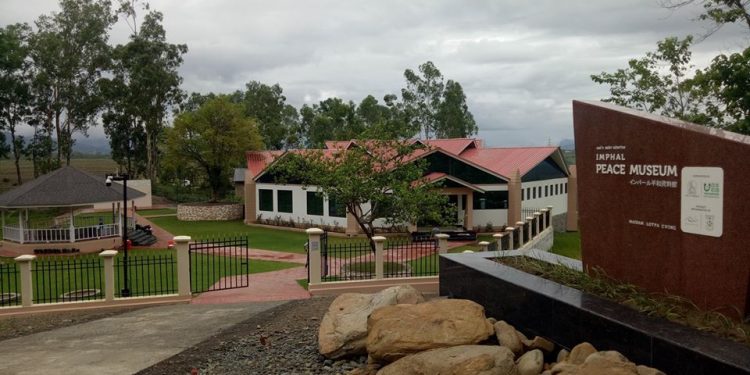 The first anniversary of Imphal Peace Museum (IPM) is being observed differently in Manipur.

The observance is being done on a digital platform due to nationwide lockdown and curfew to prevent the spread of COVID-19 pandemic.

The museum opens its doors on the 75th anniversary of Battle of Imphal that saw some of the fiercest fightings of World War II.

Live international concert for peace was performed jointly by musicians from Manipur and two islands -Taketomi and Okinawa of Japan.

Speeches were shared through online platforms which were the main highlights of the observation at its premises located at the historic foothill of Red Hill, 20 km south of Imphal on Tuesday.

Ambassador of Japan to India, Santoshi Suzuki thanked the efforts of all the contributors in developing the museum.

In his brief video speech which was also webcast live during the event, he said that he is truly believed that the museum will connect the past, present and future and also the years to come.

In the same way, Yohei Sasakawa, chairman of the Nippon Foundation remarked that further enhancement of peace museum will attract many tourists from Japan to visit Manipur in the near future and your efforts will contribute to further enriching India-Japan relations.

Anniversary souvenirs were also released apart from honouring Dr Dhabali, founder president of MTF for achieving ‘The order of Rising Sun,Golden and Silver Rays’ for the 2020 award.

The IPM was developed on 10 acres of land at the foothill of Red Hill with the support of the Nippon Foundation, a non-profit grant-making organization in collaboration with Manipur Tourism Forum and Manipur Government.

IPM has three sections- war in Manipur, post war and life and culture.

IPM which now stands as a symbol of peace, has become a member of the International network of museum of peace.

The IPM opened its doors on June 22 last year coinciding with the 75th anniversary of Battle of Imphal where some 70,000 Japanese soldiers, alongside those of Indian National Army, died in battles with the British-led Allied forces in areas around Imphal and Kohima from March to June 1944.

The last of these battles was fought at Red Hill, where the peace memorial was built to mark the anniversary of the battle.