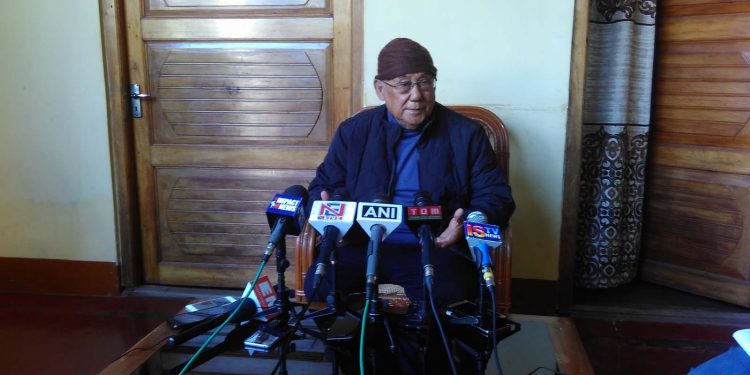 Speaking to reporters at his Thangmeiband residence in Imphal, the renowned film director, and composer, Aribam Syam Sharma said his protest against the CAA is not only for Manipur but for the whole of Northeast.

He said, “Northeast cannot be a dumping ground for foreigners.”

The Act seeks to grant Indian citizenship to persons belonging to Hindu, Sikh, Buddhist, Jain, Parsi and Christian communities who have migrated to India after facing persecution on grounds of religion in Pakistan, Afghanistan, and Bangladesh if they fulfil conditions for grant of citizenship.

The 83-year-old prominent filmmaker returned the Padmashree award in solidarity with the protests against the CAB (now CAA) in February this year.

He, however, expressed happiness over the development that the areas under the Inner Line Permit (ILP) regime are out of the purview of the CAA.

The ILP, which was in force in Arunachal Pradesh, Mizoram, and Nagaland, has also been extended to Manipur on December 11 after union home minister Amit Shah made a statement in Parliament on December 9.

Late President Dr APJ Abdul Kalam had conferred the Padmashree award to the noted filmmaker from Manipur for his contributions to Manipuri cinema and the world of films in 2006.

Sharing his solidarity with the people of Northeast in the ongoing movement against the new citizenship law, the legendary filmmaker alleged that the Act is “detrimental to the Northeast”.

The Northeast has been witnessing continuous movement against the CAB, which was passed in both the Houses of the Parliament and became an Act following President Ram Nath Kovind’s assent to it.