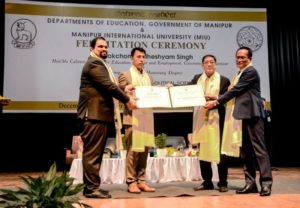 The honorary doctorate was conferred by European University of Brcko District (EUBO) of Bosnia and Herzegovina.

Organized by the department of Education with Manipur International University (MIU), the felicitation ceremony was held at the Manipur State Film Development Society (MSFDS) in Imphal.

The honorary doctorate was awarded by the chancellor, Professor Dr Nedeljko Stankovic at Belgrade City of Serbia on December 6 last.

Speaking on the occasion, former vice chancellor of Manipur University, Prof H Nandakumar Sarma said it is a moment of pride that such a prestigious degree has been conferred to a person from Manipur.

Lauding the services and works of Dr Thokchom Radheshyam as the education minister, he said tremendous improvement and changes are visible in the schools and higher education sector.

He also appealed to the teachers to give full support in the learning of students.

Among the literacy rate of Indian states in Census 2011, Manipur stands at 16th position and this ranking needs to be improved in the next census, he also said.

Education, he stressed is the backbone for growth and development of a nation.

Dr Thokchom Radheshyam in his speech shared the experience of his short stint in Bosnia and Herzegovina serving as the regional chief of Human Rights in United Nations’ Mission in 2001-2002.

He said education enables a person to inculcate tolerance, respect and appreciate the rich diversity of different cultures.

He also opined that education is not only to acquire a degree or diploma but to gain knowledge and imbibed in oneself the sense of service, connecting with each other and sacrifice for the motherland  and work for the betterment of the society.