The representatives of State of Manipur’s King Leishemba Sanajaoba have announced separation from India, forming the Manipur State Council.

The dissident political leaders on Tuesday said they were unilaterally declaring independence from India and forming a government-in-exile in Britain, according to reports.

The exiled government will be based in Central London.

The former princely state became part of India in 1949, two years after the country won independence from Britain, but since then it has witnessed decades-long violent separatist campaigns.

They produced a document showing that ‘His Highness the Maharaja of Manipur’ had authorized them by the Order No 12 of 2013 dated the March 15, 2013 to solve the political problems of the state of Manipur. 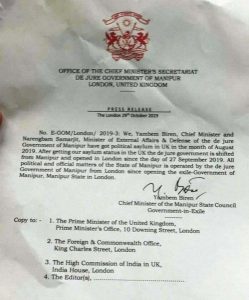 Both of them confirmed that they have already sought asylum in the United Kingdom in September 2019, fleeing persecution and repression by the Indian state as declaring independence in India would have led them to being arrested and killed arbitrarily by the Indian security forces.

They said that Narendra Modi’s government is intolerant and believes in physical annihilation of small nations and communities for the sake of Hindutva supremacy and therefore it was not safe for them to continue operating from India.

They said that Manipur is being ruled through draconian laws by the Indian occupation government ‘under the Republic Constitution of India including Arms Forces (Special Powers) Act 1958’.

They said that thousands of people have been killed since the occupation of Manipur.

Nearly 4500 have been killed unlawfully in the last 10 years and more than 1500 are in prisons in illegal custody.

The total loss of life stands at around 15,000 in the last few decades, they said referring to a BBC report which had unearthed the scale of unlawful killings and human rights violations.