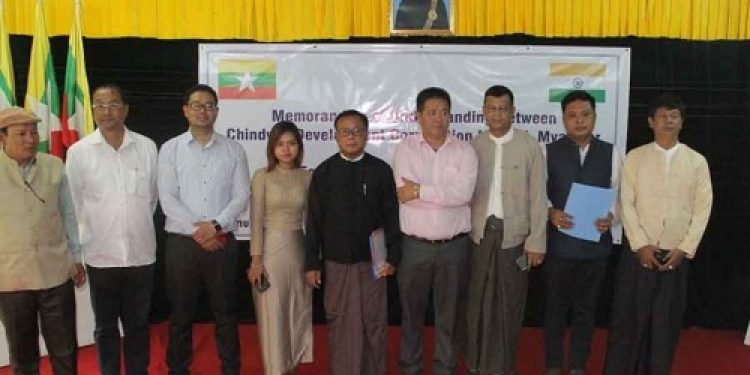 In order to promote friendship, trade, socio-economic development and to increase mutual understanding between India and Myanmar, a memorandum of understanding (MOU) was signed between two business groups of the two countries on Saturday at the district commissioner office located at Tamu in Sagaing of Myanmar.

The memorandum was signed between director of Chindwin Development Limited (CDL), Myanmar, Soe Myint and secretary of Business Excellence Group of Manipur, Hiro Thokchom in presence of convener of Act East Policy Committee of the State Government, R K Shivachandra.

A report in ifp.co.in stated that the MoU was signed with the motives of working together and to usher in growth on economic and social development projects that may take place for mutual benefit for the two countries especially in the Sagaing region.

The purpose for signing of the memorandum is to support and promote the friendship and mutual understanding between the two nations, to promote solidarity, mutual amity, respect and neutral assistance among the regional residence around the border races, reports added.

The MoU was also signed to promote socio-economic development activities including education, health, economy, transport and communication and create a modern and developed region at the border area.

In the MoU, it is mentioned that in accordance with the law of each nation, each party will be required to provide proof of coverage for all the mandated insurance required by the state or states in which work will take place and include fair labour practices and any other mandates of the affected state or states where the operation are taking place.

The report further added that executive help and support activities will be made upon the occurring opportunities for the advantage of both the parties with collaboration.