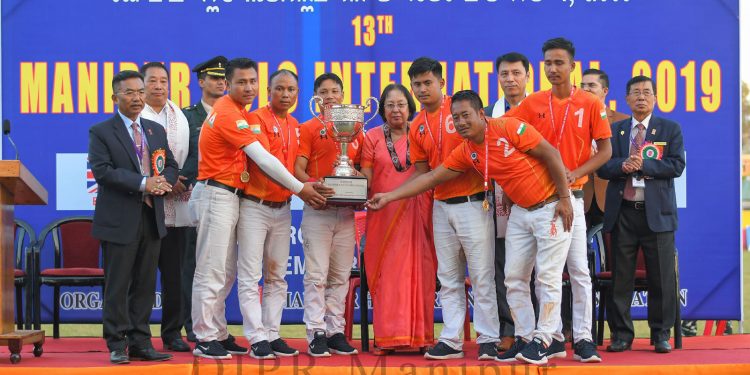 India (B) comprising polo players from Manipur emerged champion of the 13th Manipur Polo International 2019 by defeating England team by 6-5 goals at Mapal Kangjeibung in Imphal.

The week-long 13th Manipur Polo International 2019 was held as part of the Manipur Sangai Festival 2019, an annual state tourism festival organised in the last week of November.

The event continues to be organized since 2010.

The 13th Manipur Polo International 2019 was participated by five polo teams including three foreign countries – England, France and USA and two host teams-India (A) and India (B).

The closing ceremony of the international polo competition was attended by Manipur governor Najma Heptulla as chief guest.

Speaking on the occasion, governor Heptulla expressed her appreciation to the initiative taken up by the state government to establish a Pony Sanctuary at Heingang and termed it is as a very positive step for preserving the breed.

Heptulla also encouraged all the pony owners to protect and preserve the ponies as the breed is under threat and their numbers are slowly decreasing due to lack of proper preservation.

She stated the Manipuri pony is one of the five recognized breeds of ponies and horses in India.

Polo has its origin in Manipur and as per historical records it was played in different parts of the world in different times but it was lost in antiquity except in Manipur where it was a popular game.

She also congratulated the Manipur Horse Riding and Polo Association for their initiative in organizing the international event, inviting teams from other parts of the globe and hopeful that Manipur would be placed in the Polo map of the world, which is richly deserves.

Later, governor Heptulla handed over a trophy and cash award of Rs 1 lakh and Rs 50,000 to winning team India (B) and England respectively.