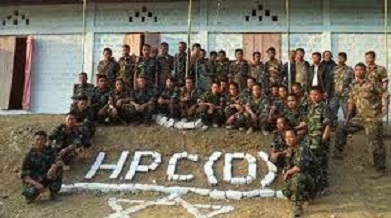 The Manipur insurgent group also demanded the authority to probe into the alleged missing of 72 rice bags earmarked for six Hmar dominated villages in Thanlon assembly constituency in the Manipur’s Pherzawl district.

The HPC (D) in a statement said its general secretary Isaac Hmar along with other leaders met Thanlon MLA Vungzagin Valte at his residence in Churchandpur town on April 25 to apprise him of the neglect and relative deprivation faced by residents of six Hmar villages- Pherzawl, Tinsuong, Talan, Damdiei, Serhmun and Leisen in terms of relief during the nationwide lockdown.

Hmar also questioned the whereabout of 72 rice bags meant for the six villages, which were allegedly mislaid by the MLA.

However, Vungzagin Valte paid a deaf ear to the request and all a sudden twisted the event and leveled “extortion and demand” charge on the HPC (D), the statement said.

It said that the MLA further threatened the HPC (D) cadres and forced them to tender apology before media failing which they will be arrested by the police.

“Vungzagin employ his security guards who are state and non-state actors to forcefully tender our cadres public apology. Our gentlemen approach was shamelessly thwarted.  The authorities concern should immediately look into the shameless high handedness exercise by the MLA,” said John L Hmar, publicity secretary of the outfit.

The Hmar outfit also said that it had extended sincere support to Vungzagin Valte in the last Manipur assembly polls in March 2017 as a result of which he sweep the polls.

“The HPC (D) still extends the same support and co-operation to the MLA. However the crisis resulted out of the Covid-19 menace has left the six Hmar villages with acute food shortages, depriving them of their share of basic necessities that comes under their constitutional rights,” the statement said.

The outfit said that the MLA has moral responsibility to look after the welfare of the villagers of his constituency, who are stranded in Churachandpur town due to the ongoing lockdown.

The HPC (D), which is currently under Suspension of Operation (SoO) with the Centre and the Manipur government, also claimed that it strictly adhere to the ground rules and did not involve in any anti-social elements.

In a video clip widely circulated on social media recently, Issac Hmar was seen expressing apology to the MLA at the latter’s residence in the presence of media.