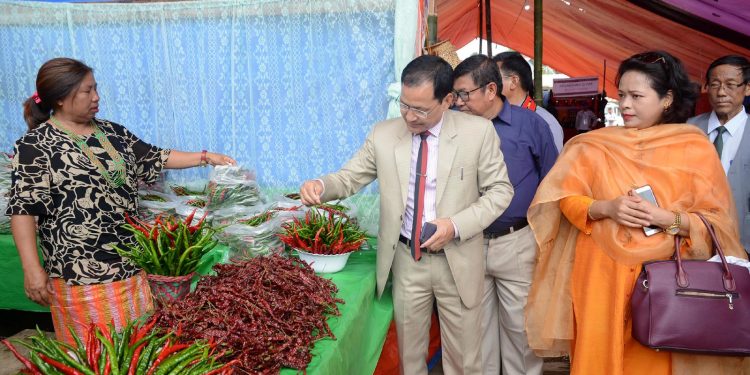 In an effort to preserve and promote exclusive chilli having pleasing characters and also get benefit from its plantation, a three-day annual chilli festival began in Sirarakhong village, about 80 km north of Imphal in Manipur’s Ukhrul district.

The opening ceremony of the 10th edition of the festival was attended by Ukhrul DC Joseph Pauline along with a host of other dignitaries and local villagers.

According Sirarakhong residents around 250 households in the village are engaged in chilli plantation and a successful chilli cultivator earns around Rs 2 to 3 lakh a year.

“The chilli plantation using the greenhouse in the village helps in fast growth but it compromises the size when compared with the natural plantation,” said one of the villagers.

Besides its unique taste, the dry red chilli powder of Sirarakhong produce a unique colour and pleasing odour when added to curry especially to meat and is said to possess nutritional values according to experts.

“Though we cannot ascertain this year’s total production as of now as the harvest season is yet to be completed, we believe the production may increase as there is less rainfall in our village this time comparing with the previous year,” informed a villager.

“The chilli variety available here is one of the best health concerned chilli and its demand is high now,” the villager added.

The village has been reportedly harvesting around 10,000 kilograms every season (July-September) without any technical inputs or chemical fertiliser.