The two journalists were released by the police after the duo submitted an ‘apology letter’ to the authorities.

The police in Manipur have released the two journalist, who were detained over an article published in the news portal The Frontier Manipur.

Editor-in-Chief of Imphal-based The Frontier Manipur – Sadokpam Dhiren and the Executive Editor of the news portal – Paojel Chaoba were arrested on Sunday.

The duo were charged under Unlawful Activities Prevention Act (UAPA) and Indian Penal Code (IPC) in connection with an article published in their web portal.

Meanwhile, clarifying on the reports of the two journalists being arrested, Imphal police said: “They were detained, not arrested. After questioning, we have released them but the case is not closed.”

The two journalists were released by the police after the duo submitted an ‘apology letter’ to the authorities.

“Article titled – ‘Revolution in a mess’ was uploaded in our online news portal The Frontier Manipur. The source was unverified and came from a person called M Joy Luwang. I regret that the Government finds the article questionable and I submit that it was an oversight from our part,” the letter from Paojel Chaoba to the SP of Imphal West Police stated.

“There will be no such mistakes which will not pass our scrutiny in the future,” the letter further added. 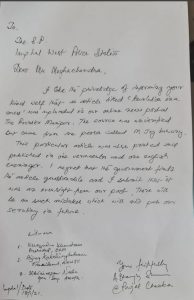 A crucial meeting was held between Manipur Chief Minister N Biren Singh and representatives from the Editors Guild of Manipur (EGM) and All Manipur Working Journalists Union (AMWJU) on the matter.

A copy of the ‘apology letter’ from the two journalist was also submitted to Chief Minister N Biren by the representatives of the EGM and AMWJU.

Notably, the Editor’s Guild of India had termed the cases registered against the editors as a threat to free expression and democracy and demanded for immediate release of the duo.

The Manipur Police have booked the two editors of online news portal The Frontier Manipur and charged them under sedition law.

The police have also brought charges of “supporting a terrorist organisation” under the amended Unlawful Activities (Prevention) Act.

The police in their FIR said the author of the article “openly endorsed revolutionary ideologies and activities and expressed shock at the deteriorating character of the armed revolutionaries of Manipur in the last decade”.