Curtains come down on NE-Myanmar business and education conclave 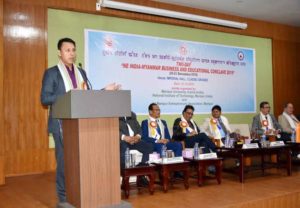 The minister was speaking at the valedictory function of the two-day NE India-Myanmar Business and Education Conclave 2019 in Imphal.

He also said education is all about collaboration, communicating, developed analytical thinking, which is also the soul of business.

The function was jointly organized by Manipur University, National Institute of Technology, Manipur and All Manipur Entrepreneurs’ Association.

Speaking on the occasion, the rector of Myanmar University Prof Soe Win emphasized on the importance to have collaboration between the universities to bring development in the region.

He added through these collaborations, important research can be carried out to solve the problems and issues in the region in order to promote trade.

He also expressed that due to the proximity and closeness of the two regions, one can see a lot of similarities in the cultures and languages of the regions.