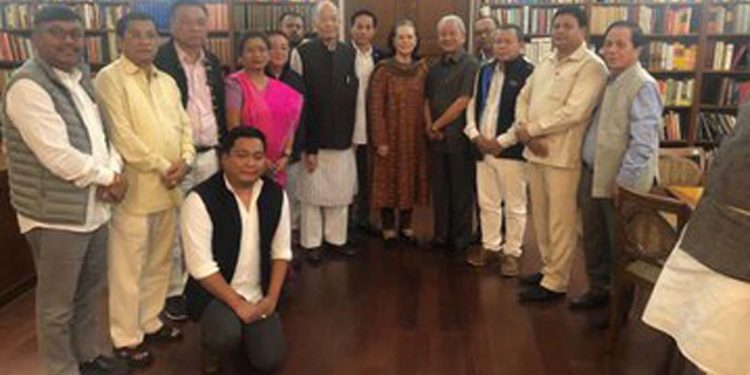 Congress president Sonia Gandhi on Saturday said her party will oppose the contentious Citizenship Amendment Bill (CAB) in the winter session of the Parliament.

“The Congress president has assured us that the party will oppose the CAB inside and outside the Parliament,” said former Manipur chief minister Okram Ibobi Singh.

Sonia gave the assurance to the former Manipur CM and 14 other members of a Congress delegation from Maipur who called on Sonia Gandhi at her residence in Delhi on Saturday evening.

“Manipur can’t be a dumping ground for foreigners…if they are given Indian citizenship, our indigenous people will become minority,” said O Ibobi Singh adding, “Manipur will be severely affected with this bill.”

The delegation from Manipur also raised the issue of Naga peace accord.

“The government should make the contents of the peace accord public,” said O Ibobi Singh.

He said for satisfying one party the “government can’t play with the sentiments and territorial integrity of others”.

Earlier in the day, the delegation also called on CPI (M) general secretary Sitaram Yechury and submitted a memorandum in connection with their demand.

According to reports, the winter session of Parliament will see over 35 legislations to be taken up by the NDA government, including the controversial Citizenship Amendment Bill.

The session will begin on November 18 and end on December 13.

The Central government is likely to push for passage of the Citizenship Amendment Bill that seeks to grant citizenship to non-Muslim immigrants from Afghanistan, Bangladesh and Pakistan.

The BJP-led NDA government had introduced the bill in its previous tenure but could not be passed in the Parliament due to vehement protests by opposition parties.

The bill was passed in the last Lok Sabha on January 8, 2019 but the government could not table it in the Rajya Sabha following protests from different quarters.

The Bill lapsed following the dissolution of the last Lok Sabha.

Former deputy CM Gaikhangam, informing about the meeting with Sonia Gandhi tweeted:  “A delegation of Manipur MLA’s including the CLP Leader and myself met with Congress President, Smt. Sonia Gandhi at her residence, this evening.”

“We discussed about CAB and non disclosure of the Naga Framework Agreement by the BJP Govt,” he added.

A delegation of Manipur MLA’s including the CLP Leader and myself met with Congress President, Smt. Sonia Gandhi at her residence, this evening.

We discussed about CAB and non disclosure of the Naga Framework Agreement by the BJP Govt. pic.twitter.com/vNYo8uSfgv