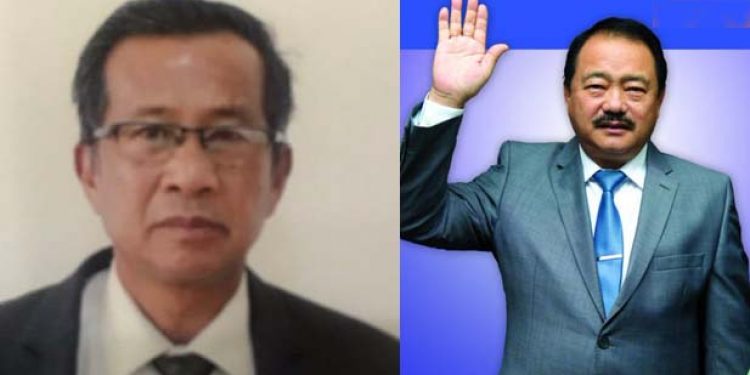 After the ruling Bharatiya Janata Party (BJP), the Indian National Congress (INC) also released its list of party candidates for the 17th Lok Sabha elections having names of candidates for the two parliamentary seats in Manipur on Saturday night.

As per the latest list of party candidates for the ensuing Lok Sabha polls, the INC has named O. Nabakishore Singh to contest the Inner Manipur parliamentary seat while K. James has been named as the party candidate for the Outer Manipur (ST) seat.

It may be mentioned that till 10 pm, there was no official announcement on the Congress candidates for the two parliamentary seats in Manipur.

However, both the aspiring party candidates – ex-State chief secretary O. Nabakishore and K. James, an entrepreneur, have finally been selected by the party out of 16 candidates, who applied for Congress tickets for the Inner and Outer Manipur parliamentary constituencies.

The candidates were waiting for the release of party’s candidates list for the Lok Sabha at the Congress Bhavan in Imphal till 8.30 pm on Saturday.

Speaking to reporters, minutes before their departure from the Congress Bhavan on Saturday, K James said that he was confident of getting Congress party ticket for the upcoming Lok Sabha elections so that he could to address the issues of the weaker section in the State as one of his priorities.

He also expressed concern for not giving voting rights to eight Assembly constituencies in valley districts under the Outer Manipur parliamentary constituency.

Manipur Pradesh Congress Committee (MPCC) sources said the State party functionaries were expecting the official release of the names of the Congress from the national capital for the polls on Saturday night itself.

Ex-State chief secretary O Nabakishore is a resident of Ningthoukhong in Manipur’s Bishnupur district while K. James is a resident of Tangkhul Hundung under Kamjong district but presently staying at Sangaiprou in Imphal West district.

It may be recalled that one of the party ticket seekers (for the Inner Manipur seat) ex-MLA Dr Ng Bijoy of the Congress party along with four other ex-MLAs have already joined a regional political party called North East Indian Development Party.

Earlier, Bharatiya Janata Party (BJP) had announced party’s State unit spokesperson Dr RK Ranjan and social worker and party’s State unit vice president H Shokhopao alias Benjamin Mate as their candidates for the Inner and Outer Manipur parliamentary seat for the Lok Sabha poll which is scheduled to be held in the State on April 11 and 18 next.

Renowned environmentalist RK Ranjan will contest for the second time from the Inner Manipur parliamentary constituency.