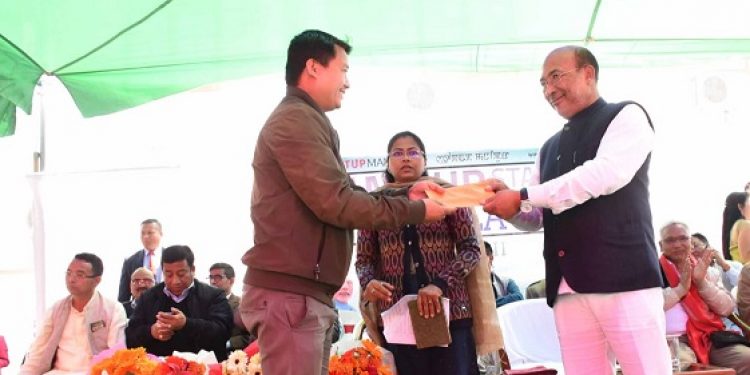 He also handed over cheques to six beneficiaries of Phase-I, who have completed mandatory training.

In all, 3966 applications were received in the Phase-II of StartUp Manipur. Out of these, 42 entrepreneurs were selected under Revenue Stage, 575 under Idea Stage and 177 under Entrepreneurship Support Scheme.

In the Phase-I last year, 334 entrepreneurs were benefitted.

Addressing the conclave, the chief minister said that Manipur has many young people, who are immensely talented and skillful in different fields. As such, the State Government feels that the need to provide the much needed support to them so that they may grow as successful entrepreneurs, he said.

Earlier, it was hard for people to get bank loans and monetary assistance from the Government to start a business. However, the new Government has rectified this old system and started providing support in a hassle-free manner because it has full confidence in the potential and talent of the youths of the State, he said.

He informed that the Government has started earmarking Rs 30 crore in the budget for StartUp Manipur every year.

Maintaining that Manipur is now marching ahead since the last few years, the Chief Minister said that he is pressing the Centre to help introduce Imphal-Mandalay-Bangkok flight service.

On the issue of water scarcity, he mentioned about the urgent need for a comprehensive plan of switching from jhum cultivation to other forms of environment friendly cultivation and large scale plantation of trees both in hill and valley areas.

Stating that water scarcity is becoming a serious threat, he also urged the people not to pollute rivers by dumping garbage and waste materials in rivers.