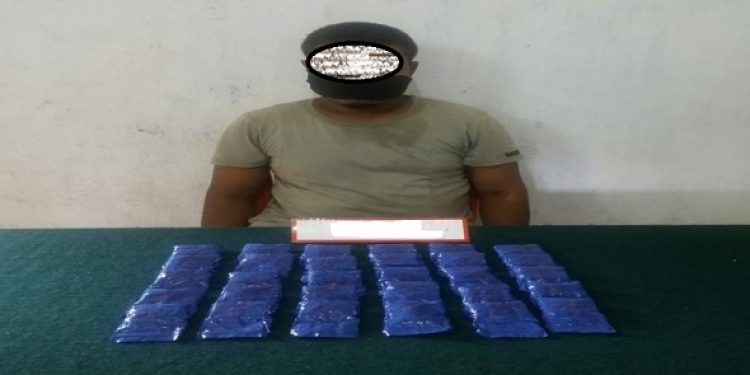 In continuation of their efforts against contraband drugs, the Tengnoupal Battalion of 26 Sector Assam Rifles under the aegis of Headquarters IGAR (South) seized 6,000 WY (World is Yours) Amphetamine tablets from a vehicle at Khudengthabi in Manipur’s Chandel district.

One person has been nabbed on charges of being involved in it.

The WY tablets were found underneath a van hidden near the chassis of the vehicle, stated an Assam Rifles South) press release.

“On 29 September 2018, at around 12.30 pm, based on specific input received regarding smuggling of contraband drugs, a silver coloured Maruti Van (AS 11 J 8188) travelling from Moreh to Pallel was stopped at Permanent Vehicle Check Post at Khudengthabi for checking,” stated PRO, Assam Rifles (South) in a press communique.

“On thorough checking of baggage and vehicle, 6,000 numbers of WY tablets were found underneath the van hidden near the chassis of the vehicle,” the press communique added.

On interrogation, the person nabbed in the case revealed that he bought the drugs from Namphalong (Myanmar) and was planning to sell the same in Imphal.

“Approximate cost of the contraband drug is Rs 30 lakh,” it added.

The apprehended individual, identified as 23-year-old Ashrif Khan, son of Ahamad Ali, a resident of Moreh Ward No 5 along with the recovered items have been handed over to the Narcotics Control Bureau, Imphal, the Assam Rifles PRO informed.

Meanwhile, in one of the biggest seizure of drugs in recent times, a team of Assam Rifles recovered approximately 1.3 kg of Brown Sugar and 1,30,000 numbers of WY or Amphetamine tablets costing about Rs 12 crore from L Youjang village at Moreh, a commercial border town of Manipur on August 18.

On April 2, the Assam Rifles also seized banned drugs called World is Yours (WY) worth Rs 16 crore from a person, who was travelling in a bus, during checking at Khudengthabi check post along Imphal-Moreh road in Manipur’s Tengnoupal district.