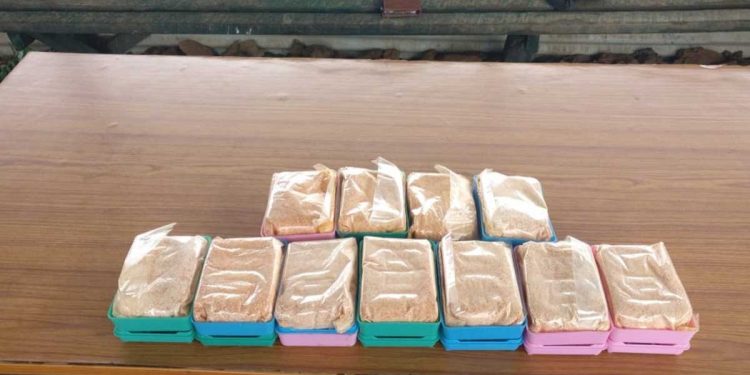 “On carrying thorough check of the vehicle, 11 packets of suspected brown sugar worth Rs 28 Lakh in the international market were found hidden inside the bonnet of the vehicle,” the release added.

The apprehended man along with recovered items have been handed over to the Narcotics Control Bureau, Imphal for further investigation.

On the other hand troops of Assam Rifles also recovered contraband items at around 6 am on Wednesday at Sita- Lipham Khullen track junction in Tengnoupal District.

Suspicious movement of Kenbo bikes was spotted by the troops on the Sita-Lipham Khullen track-junction, it said adding that on being challenged, the Kenbo bikers left behind their smuggled items and fled from the scene.

On carrying out thorough checking of the items, 2 cartons of imported Cigarettes worth Rs 3 Lakhs, 8 cartons of Godzilla Coils worth Rs 64,000 and 150 Kgs of Betel Nuts worth Rs 90,000 were recovered, it added.

The total recovery was worth Rs 4,54,000 approximately, as per International market value.