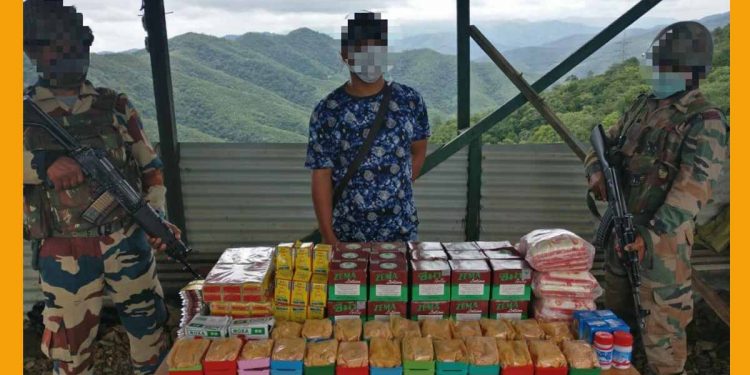 “At around 9.30 am, during the routine vehicle checking, a team of Tengnopal Battalion stopped a white colour Echo Van travelling towards Imphal,” said PRO Assam Rifles(South) in a press statement.

“On thorough checking of the vehicle, suspicious items were found hidden inside the vehicle,” the release added.

“The vehicle was stripped and checked thoroughly and suspected brown sugar in 23 soap cases worth Rs 48 lakhs was found hidden in the bonnet of the vehicle,” it further said.

The vehicle was also carrying 152 packets of Myanmarese medicines.

In another incident, at around 2 pm, the team of Tengnoupal Battalion stopped a grey colour Alto car travelling towards Imphal.

On carrying out checking of the vehicle 18 packets of suspected Brown Sugar worth Rs 45.2 lakhs were found hidden inside the bonnet of the vehicle.

The vehicle was driven by an individual named Lamkam Baite (49).

The contraband items were being transported to Churachandpur, the release said adding that those apprehended and the recovered items have been handed over to the Tengnopal police for further investigation.

At around 9 am, based on specific input, the team of Tengnoupal Battalion stopped a suspicious vehicle driven by Nurul Hasan (30) of Lilong Chingkham Makha, Thoubal district.

On thorough checking of the vehicle, 34 packets of Suspected Brown Sugar worth Rs 80 lakhs were found concealed in various parts in the vehicle.

The detained individual and the recovered items have been handed over to the Moreh police for further investigation.