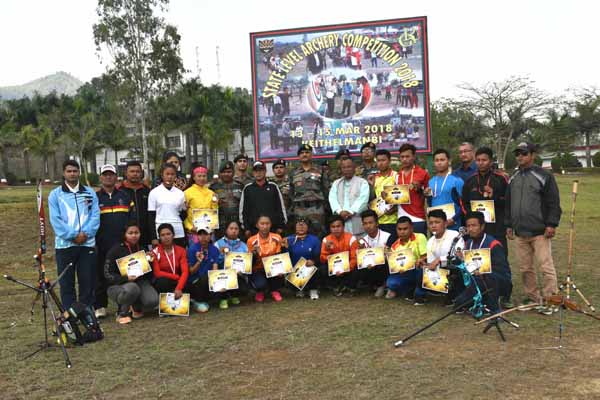 The state level tournament was organized by the 6 Sector Assam Rifles, Keithelmanbi and the Competition was held in three different categories namely Indian, Recurve and Compound rounds.

Attending the function, Health and Family Welfare Minister L Jayantakumar Singh said that organizing such competitions will indeed help to groom the young sporting talents of the state. This is a step ahead for the players.

The role of Assam Riffles in the state is really significant. They are helping the state Government in many spheres, he added. Minister appreciated the initiatives of the Assam Riffles especially in the sporting arenas. He also advised the archers of the state to work harder so that they can bring laurel to the state and the country as well.

Medals and Citations were also distributed to the winners of the Competition by the minister.

In the closing function held at the ground of 6 Assam Rifles, Keithelmanbi Brigadier Amit Kabthiyal, Commander 9 Sector Assam Rifles and Colonel. Indrajit Singh, Commandant 6 Assam Rifles attended the function and also joined at the distribution of medals and citations to the archers.