74th anniversary of Battle of Red Hill commemorated in Manipur 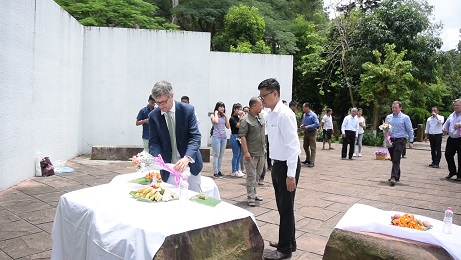 As part of commemorating the 74th anniversary of the Battle of Red Hill, the British Deputy High Commissioner to India Bruce Bucknell on Tuesday paid floral tribute at India Peace Memorial, at Maibam Lokpaching 16 km south of Imphal along Imphal-Tiddim road in Manipur on Tuesday.

Speaking on the occasion the British envoy said, “We should remember all the soldiers from various nations because remembrance will avoid future conflicts. Today’s younger generation does not like small conflicts that will create major conflict like the one which happen 74 years ago.”

The 74th anniversary of the Battle of Red Hill was commemorated during a programme was organized by 2nd World War Imphal Campaign Foundation.

The day’s function, marked by paying of floral tribute at the memorial site, was attended by British Deputy High Commissioner along with his two officials, members of Indo-Japan Friendship Association, students of Manipur University, who are pursuing degree course in Tourism and Hospitality besides members of local clubs and associations.

It may be mentioned that the Battle of Red Hill, also known as Point 2926, was one of the fiercest battles which was fought in Manipur during the 2nd World War wherein the Japanese attacked and occupied parts of the Red Hill and Maibam village under present Bishnupur district of Manipur on May 21, 1944.

Intense and historic battle ensued for nine days between the Japanese and a combined British effort involving infantry, armour, artillery and air attacks, which came to an end on May 29, 1944.

The functionary of 2nd World War Imphal Campaign Foundation, which has been working for the reconciliation and restoration of world peace since its inception, also read out the message sent by Mrs Akiko Macdonald, the present chairperson of Burma Campaign Society and Kenichi Okuyama, who is the former Deputy Mayor of Shonai, Japan during the gathering.

In her message Akiko Macdonald remembered the soldiers, who fought in the battle and prayed that all the soldiers’ souls rest in peace while Kenichi Okuyama conveyed that India, Great Britain and Japan should deepen the friendly relation and promote goodwill.

The 2nd World War Imphal Campaign Foundation has been commemorating almost all the major battle locations in Manipur for quite sometimes now. The foundation has also discovered major battlefield locations with their research which were unknown to the world before.