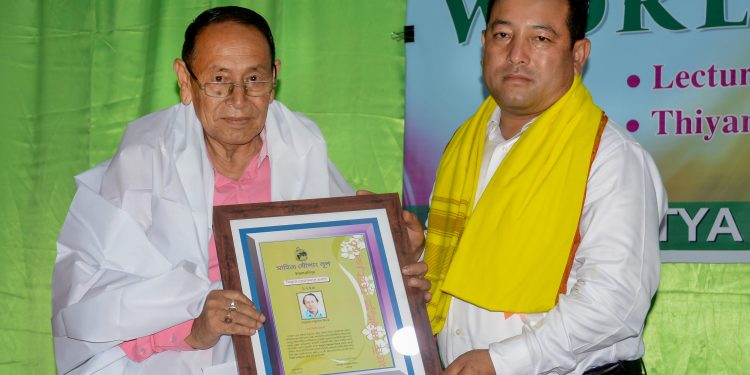 Manipur’s veteran journalist and writer Kangujam Madhumangol has been awarded the first Thyam Premkumar Award for his dedication and achievement in the field of journalism in Imphal.

The award was presented to the veteran journalist Madhumangol who had edited Prajatantra, one of the oldest vernacular newspapers in Manipur and from where he took retirement. He was also the editor of popular cable TV network ISTV (Information Service Television) for sometime.

The first Thyam Premkumar award which includes citation and cash award of Rs 10,000 was handed over to the journalist and writer during the world press day observation in Imphal on Friday.

The function was held under the aegis of Sahitya Thoupang Lup, Imphal at Manipur Hindi Parishad hall in Imphal.

Expressing his desire to continue giving such award and honour to journalists in the years to come for improvement in the field of journalism on merit basis, IPR director Balkrishna also highlighted a brief history of the awardee and appreciates him for his presentable, dynamic, powerful and dutiful for the improvement and development of IPR and information activities for the people and the State.

Former IPR director Meghachandra Kongbam thanked the gathering and said that freedom of Press is very important for the safeguard of democracy and also highlighted the challenges and danger while carrying out journalistic activities.

During the function, former district information officer Chongtham Ibungobi Singh of IPR spoke about the life he has known about Thyam Premkumar saying that he was a dedicated person throughout his life and who never stopped working for the uflift of its department and information services till his last breath.