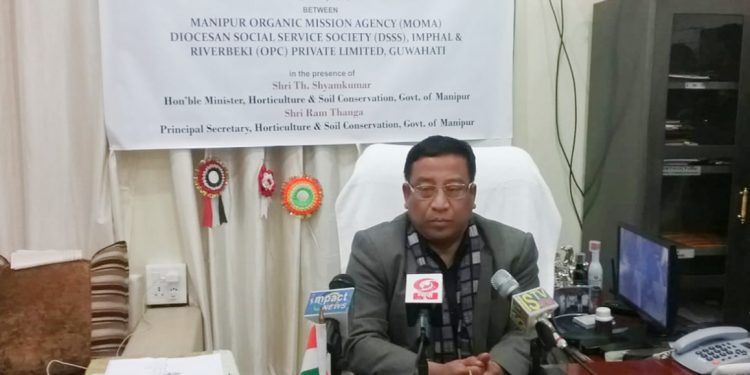 The MOA was signed in presence of Manipur Horticulture and Soil Conservation Minister Th Shyamkumar at his New Secretariat office in Imphal on Sunday, official sources disclosed.

Encouraging the organic farmers of the State to continue to work hard to increase the production, Minister Th Shyamkumar while speaking to reporters on the occasion, said that the farmers need not worry to find a market place to sell their produces/products and assured full support from the department.

Stating that the buyers will export the products of Manipur in Europe and other countries, he said in the near future the State will try to export more quantity of products, maintaining the quality of the products.

Minister Shyamkumar further said that the various initiatives are taken by the Horticulture and Soil Conservation Department with a mission so that Manipur can become an organic state. Stating that the products produced in the State has a unique taste, he hoped that the buyers and consumers will increase the demand of the products thus helping in the economy of the State.

He appealed to all the stakeholders including the farmers to fully cooperate to make Manipur a chemical free state and put a name in the global map in the field of organic produces/products.

The MOA signed on Sunday will benefit 2,000 ginger farmers and 2,500 turmeric farmers of the State, according to Project Director K Debadutta Sharma of MOMA.

He hoped that once the infrastructural requirements are cleared, the State can easily export the products worldwide. He further informed that within next month e-auction of organic produces will be done under the Ministry of Steel and appreciated the higher authorities of the Horticulture and Soil Conservation Department for their cooperation with the MOMA.