Imphal hosts Fish Fair-cum- Fish Crop Competition 2018 with participation of fish farmers from across State where approximately 90,000 kgs of fishes are up for sale 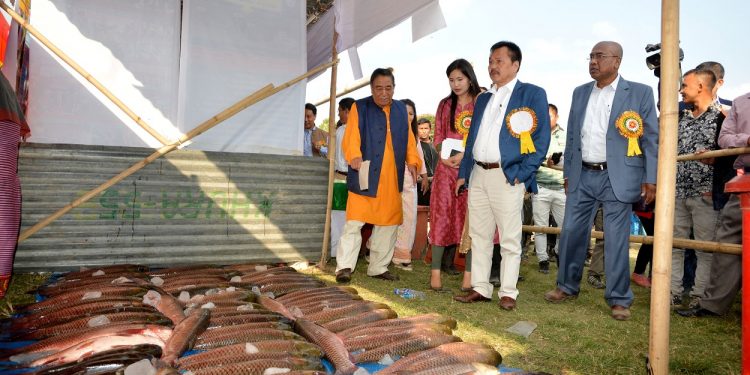 Manipur will strive towards achieving self-sufficiency in fish farming by 2022 and will discontinue import of fishes from outside the State.

This was disclosed by Manipur Fisheries Minister N Kayisii while speaking as chief guest at the Fish Fair-cum- Fish Crop Competition 2018 held at D M College of Arts, Thangmeiband, Imphal on the eve of Ningol Chakkouba festival which is being celebrated across the State on Friday.

Vice Chancellor Prof N Premjit Singh of Central Agricultural University (CAU) and Additional Director A Khamsing of Fisheries attended as guests of honour while Director Bidyarani Ayekpam of Fisheries presided over the function.

Continuing his speech, Minister Kayisii said that fish farming activities are mainly concentrated in the valley and hill areas too have potential for fish farming.

Citing that fish farming can be a great tool to solve unemployment and poverty, he encourages people to take up fish farming.

This year’s fish fair saw a wide participation of fish farmers from all over the State where approximately 90,000 kgs of fishes were put up on sale.

Besides, an award will also be given to the highest producer of indigenous fishes – ‘Pengba/Khabak’ and ‘Ngaton’.

Annual consumption of fish in Manipur is estimated to be nearly 52,000 metric tonnes against its 32,000 MT production. Fish supply from other parts of the country takes a week or more to reach the north-eastern state.