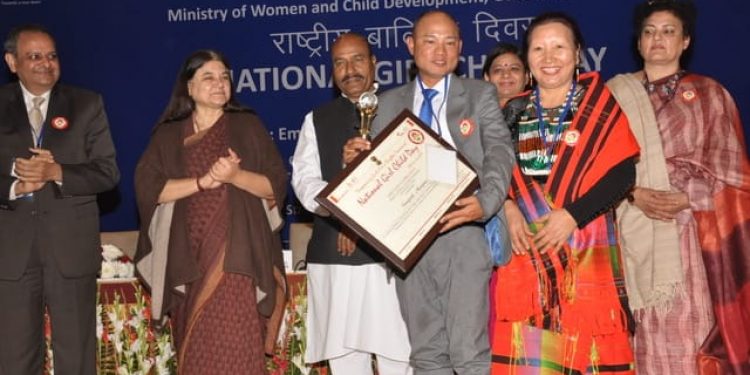 The deputy commissioner of Senapati district in Manipur, Somorjit Salam along with officials received an award for implementing the Beti Bachao, Beti Padhao (BBBP) scheme effectively, according to official sources available in Imphal.

The award was handed over during National Girl Child Day function at Pravasi Bharatiya Kendra at Chanakyapuri in New Delhi on Thursday.

A booklet on ‘Innovations under BBBP’ was also released on the occasion. The ministry has compiled 38 innovative activities from districts across the country to set an example for other districts, according to PIB reports.

A slide show on various activities under taken by state/UTs and districts also featured during the programme. A Northeast choir presented a lively song by Mao students, it added.

As per the theme of NGCD, three local champions (Wokha district of Nagaland, Firozepur district of Punjab and Tiruvannamalai district of Tamil Nadu) shared their experiences and highlighted how they are motivating others too.

NGCD was organized to generate awareness on the issue of declining child sex ratio and creating positive environment around valuing the girl child.

Manipur’s Senapati district has been selected and recognized as one of the 25 districts of the country for their exemplary performance on BBBP scheme in the category ‘Effective community engagement’.

Five states including Nagaland from the Northeast were also felicitated for their performances on the BBBP scheme.

Earlier director Ashok Kumar Yadav of BBBP, ministry of women and child development had already written a letter to the Senapati deputy commissioner in this regard.