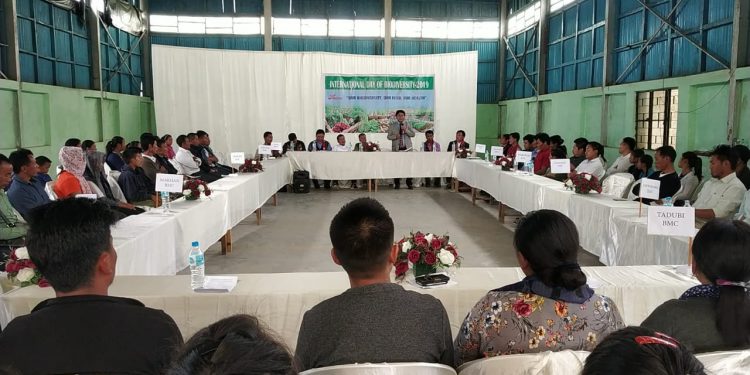 International Day for Biological Diversity was widely observed with the theme ‘Our biodiversity, our food, our health’ in Manipur on Wednesday.

The day was observed by Biodiversity Management Committee (BMC) of three villages-Kaibi, Makhel and Tobumai under Mao area in Manipur’s Senapati district.

It was jointly observed by holding a public discussion at Tadubi town hall.

President S P Peter Khrasi of Mao Council was the resource person during the event which was attended by the functionaries of BMCs of many villages under Mao circle. Chaiman L Zhunio of Kaibi BMC gave the key note address while secretary Lokho Ozho looked after introduction and presentation programmes.

Divisional Forest Office of Senapati also organized a painting competition in connection with the International Day for Biological Diversity in the Senapati district headquarters.

Former MLA Alexandar Pau, DFO of Senapati John Sha and others were present on the occasion. Similar observation was also held at Tamenglong district headfquarters, 150 km west of Imphal.

In Imphal, an important observation was held under the aegis of All Manipur Working Journalists’ Union (AMWJU) and Directorate of Environment, Manipur at the hall number one of the Manipur Press Club in Imphal.

The day was also observed in district headquarters of Ukhrul, Bishnupur, Thoubal, Imphal East among others.