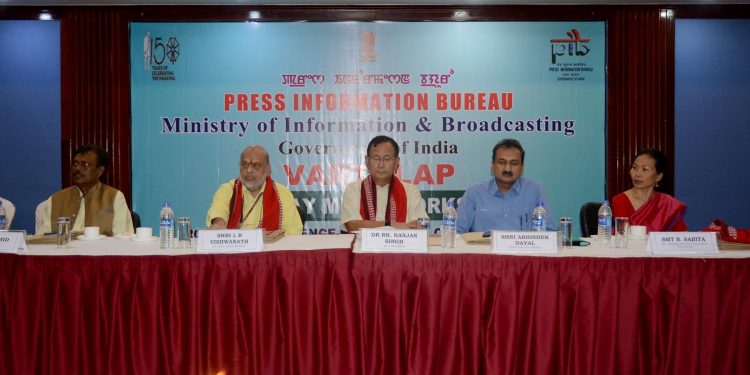 A one-day media workshop ‘Vartalap’ on the theme ‘How to make our cities better’ was held in Manipur capital Imphal on Thursday.

The workshop was held under the aegis of Press Information Bureau (PIB), Ministry of Information and Broadcasting, Government of India.

The idea of the workshop was to disseminate awareness on various development projects of the government to the general public.

On the other hand chief town planner Y Naramada said the state authority is planning to construct 42,651 houses across 27 towns of the state under Pradhan Mantri Awas Yojana (Urban) by 2020.

But so far the construction of about 3000 houses was completed while 17,305 houses are under construction, she said.

The construction of 229 houses was completed out of targeted 711 houses in Wangjing-Lamding town which has the maximum number of houses.

Under AMRUT, which have the development of water supply and park projects, the implementing agency (PHED) in the State provided water are a total of 57,764 households in Imphal area.

PHED officials earlier informed that pre-paid water supply will be introduced in the State once the laying of new pipelines and other formalities are completed in Imphal areas.

The media persons mostly the Imphal based reporters also sought clarification from the resource persons on few sectors in connection with the day’s topics.

Addressing the afternoon session, Lok Sabha MP Dr Ranjan stated that media persons has a great role to play in dissemination of information pertaining to the implementation of different government schemes and policies.

Urging the media persons to take the role of vigilant to achieve the goal of development and making Imphal a Smart City Mission, Dr Ranjan said, “There is a great role to be played by media in the development of the capital city into a modern smart city.”

He appealed to the media personals to educate and make awareness to the general public to achieve a good future and bright Imphal city.

He also urges the media persons rather than simply reporting, to go for investigative reporting of all the developmental projects and facilities including PDS and DBT provided by the present government so that it can be known whether it reached to the needy people or delivered to the public, he added.

In his speech, director general PIB Guwahati L R Vishwanath termed the media as ‘creamy layer’ of masses and the government.

Media have a great role to be play in realizing the dream of making a developed clean Imphal city, he said.