State govt has sought the financial assistance to provide drinking water facility to every household of the State: Manipur CM 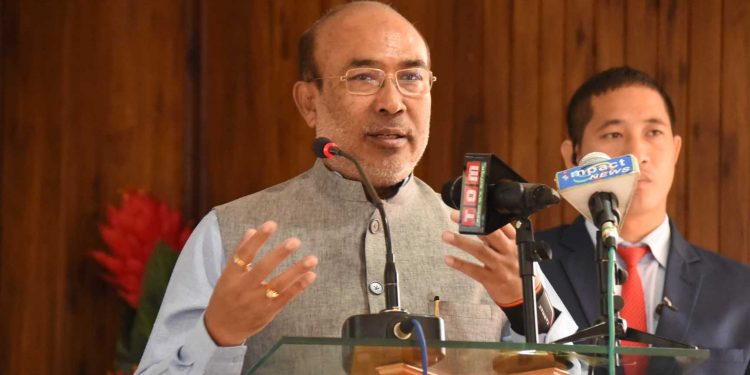 Manipur Chief Minister N Biren Singh on Saturday said that the State government has sought an assistance of Rs 2600 crore from the New Development Bank to provide drinking water facility to every household of the State.

The New Development Bank is said to be a multilateral development bank established by the BRICS states (Brazil, Russia, India, China and South Africa).

The Manipur Chief Minister was speaking at the inaugural function of new building of Lamjao Upper Primary School and laid the foundation stone of a new women market at Lamkhai Keithel (Hiyanglam-Wabagai) in Kakching District.

Stating that the government would put in all possible efforts to complete the new market shed before Independence Day this year, N Biren announced that new market sheds would be constructed at Kongba, Lamlong and Kwakeithel as well. The construction of women’s market shed at Lilong has already begun, he added.

On frequent floods occurring in Hiyanglam, Wabagai and adjoining areas, he said that dredging of Moramba Maril would begin at the earliest.

Stating that the present government would never tolerate any kind of corruption, he urged the public not to give money to anybody to get selected in the ongoing recruitment examination of IRB.

Singh stated that the ‘Go to Hills’ mission had bridged the gap between hill and valley people and strengthened oneness. On the other hand, the ‘Go to Village’ mission could enable the government to understand people’s woes, grievances and necessities.

Now ‘School Fagat-hansi’ mission has been launched with an ambitious objective to provide free and quality education to students, he said and expressed hope that the new mission would certainly benefit thousands of students.

Stating that major chunk of people’s earnings is generally spent in children’s education, he expressed hope that people would now be able to save their hard earned money for their future.

Speaking on the occasion, Consumer Affairs food and Public Distribution minister Karam Shyam said Manipur is probably the only State in the world where womenfolk play a pivotal role in supplementing families’ income through vending of vegetables and other wares in the market. He also said that ineligible households/individuals would be deleted from the list of beneficiary list of NFSA soon.

In his speech, Forest and Environment minister Th Shyamkumar mentioned about various developmental changes made by the incumbent Government in around two years.