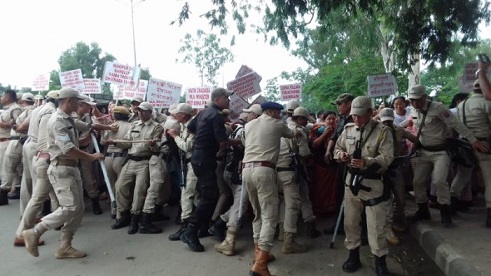 A large number of protestors, mostly women, marched towards Manipur Chief Minister’s bungalow on Wednesday in Imphal demanding a ‘collective decision’ in a special Manipur Legislative Assembly session with regard to the Framework Agreement signed between the NSCN (IM) and Government of India.

Civil voluntary organizations that took out the protest rally have cautioned that a severe form of people’s movement may arise if the government fails to hold a special Assembly session and take a resolution over the issue of the Naga Framework Agreement to save the State’s integrity.

However, a huge contingent of police personnel foiled the attempt of the protestors to enter the Chief Minister’s bungalow at Kangla.

Few of the protestors who managed to go through, were later halted by police in front of Nupi Lal memorial complex.

The protest was carried out under the banner the United Committee, Manipur (UCM).

The women leaders then reiterated that the people of Manipur will not accept any divisive policy of any Central government.

The protesters decided to hold up for the night at the street if they do not get an appointment with the Chief Minister.

Later, a small delegation of the protesters was permitted to meet the Chief Minister.

They submitted a memorandum to the Chief Minister detailing their demands.