Manipur Chief Minister N Biren Singh on Friday claimed to have hoisted the tallest and biggest illuminated national flag of the year as part of the 69th Republic Day celebrations.

The tricolour that measured 20 feet by 300 feet was hoisted on a 100 ft tall pole at the Imphal Airport on Friday.

This was informed by the Manipur Chief Minister through a tweet in his official tweeter handle. 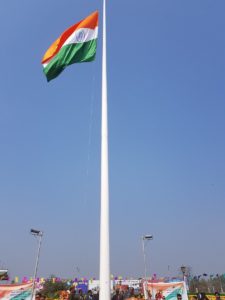 The flag was arranged by Airport Authority of India (AAI) Imphal airport.

The mast has operational lights on the top and the flag would be illuminated with flood lights so that it is clearly visible at night, according to official sources.

Speaking at the occasion, the Chief Minister announced that a flag of similar size and height would also be installed at Civil Secretariat Complex, Mantripukhri in Imphal after its inauguration.

“Under the leadership of Prime Minister Narendra Modi, India is progressing well in different fields. However, North-east India was lagging behind in terms of development in the past. However, the present Government at the Centre had started giving importance to the development of the north-eastern states by upholding the sense of a united India,” Singh said.

Maintaining that Republic Day was celebrated in all the districts of the State as in other parts of the country, he said that it was a testimony of strong and united India.

“We need to live together and help each other in order to sustain this unity and strength,” he added.

The national flag hoisted in the year 2014 at Central Park, Connaught Place, New Delhi held the unique distinction of being first tallest tri-colour in the country.

The flag is illuminated at night with the usage of eight 2,000 Watt lights.

However, this title was later claimed by the national flags hoisted at Cuttack followed by at Mumbai, Bhopal, Pune, Raipur, Hyderabad, Ranchi, Kolhapur, and at last presently at Attari which was hoisted on March 5 2017.

The 360-foot high (110 metres) flag post, said to be the country’s tallest, was inaugurated at the Indo-Pak Attari Border, just a stone’s throw from Pakistan.

The flag post measuring 110 metres in length is 24 metres in width and 55 tons in weight.