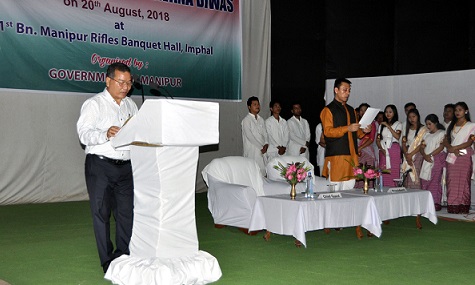 Manipur Agriculture Minister V Hangkhanlian speaking at the function organised on the occasion of Sadbhavana Diwas 2018 in Imphal on Monday. Image - DIPR

Manipur Agriculture, Veterinary & Animal Husbandary Minister V Hangkhanlian on Monday said the people need to build up good ideas and relationship with Government and march ahead.

Hangkhanlian also urged the people to keep in mind the farsightedness, rationality and the ability to take right decision in hard time possessed by the past leaders to keep the country united and strong.

He said this while addressing a programme organised on the occasion of the Sadbhavana Diwas 2018 marking the 74th birth anniversary of former Prime Minister of India, late Rajiv Gandhi at the Banquet Hall, 1st Battalion Manipur Rifles in Imphal on Monday.

Speaking on the occasion, Minister Hangkhanlian also said, “The meaning and value of observing such a day is very important in our country where there were diverse elements.”

The observance of Monday’s function will be complement to bringing peace, harmony and keeping our country strong and united, he said.

The Minister also appealed to the people of Manipur to take the observance as an opportunity of sharing positive and progressive idea and help the Government for overall development of the country and for shake of the ideas of selfishness to bring cordial relationship to make Manipur a develop state and let us pledge again to take full responsibility in our duty towards the objectives.

Education, Labour and Employment Minister Th Radheshyam, who presided over the programme, said, “The Sadbhavana Diwas has been observed today to remember and pay respect to former late Prime Minister Rajiv Gandhi on his 74th birth anniversary, who has propagated unity and harmony of different communities in the country.”

Minister Radheshyam recalled that Rajiv Gandhi was a great leader who founded new dynamic policy when instability was there in legislative in the politics of India in 1985 and brought up a new resolution to stop defection by introducing Anti-defection Bill in the Parliament and was behind lowering the voting age from 21 to 18.