The farmers of Majuli, the river island district of Assam, face another menace every year apart from flood and erosion.

It is the invasion of beetles in the cultivating fields.

These beetles eat up rice crops in hundreds of acres of land where these farmers cultivate involving hard labour.

The farmers are at their wit’s end as even after use of pesticides, these beetles create a nuisance, especially in the months of April and May, when the species reproduces in large numbers.

Notably, a specialist doctor from the Assam Agricultural University, Dr Badal Bhattacharya has been doing extensive research on mitigating the invasion of beetles in the agricultural fields of Majuli for the last three years. During his period of research, Dr Bhattacharya has come up with various means to stop this menace or at least lessen it.

These beetles are good food supplement. So the farmers are taught to catch these beetles for food when they come out for reproduction during this time of the year. 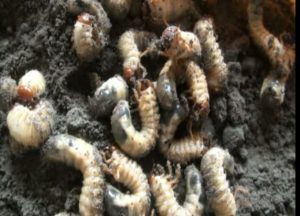 As many as 100 farmers, agricultural scientists and students of Assam Agricultural University of Jorhat caught as many as 73077 beetles in the fields using solar lamps within a time-frame of three hours.

This record event has been acknowledged by India Book of Records.

Though similar attempts were made on earlier occasions, the Monday’s effort broke all previous records and managed to enter the India Book of Records.

This event has really inspired the farmers of Majuli.