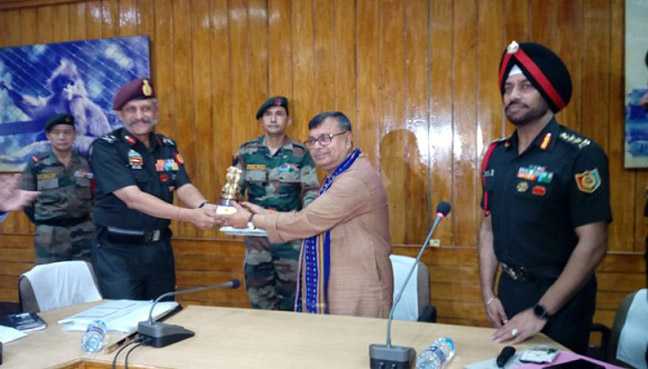 He met Tripura education minister Ratan Lal Nath and discussed the NCC activities and expansion plan in the state.

Major General Bakshi participated in the State Advisory Committee meeting held in the conference hall of the Bir Chandra State Central Library, chaired by the education minister wherein deliberations were held on all major issues to expand the footprint of NCC in the state.

Measures to provide incentives to the NCC officers and cadets of the state at the earliest were also discussed.

Other issues covered were construction of NCC Academy on the already allotted land at Mohanpur, provision of ministerial staff to NCC units, construction of obstacle course in colleges, NCC as elective subject in schools and colleges, special provision of exam for NCC cadets participating in national camps and fund allocation for NCC.

The ADG reiterated the NER Directorate’s commitment to spread the reach of NCC, a pioneer youth organization to the remotest areas of the state to motivate and help in character building of the students’ community as a national investment for the future.

The education minister assured of full cooperation to the NCC units by the state government for betterment of NCC in the state.

He visited the NCC units located near BBM College and complimented the officers and staff for the excellent work being done in grooming the youth of the state as multifaceted personalities.

Later in the afternoon, the ADG interacted with the NCC officers and the cadets.

DG Bakshi told the cadets, “NCC helps you gain several important life skills and will always hold you in good stead throughout your career.”

He urged all present to imbibe the qualities of character, comradeship, discipline, leadership, secular outlook, spirit of adventure and Ideals of selfless service and contribute toward society in whatever manners possible by becoming good citizens.