Light at the end of the tunnel for Tripura riot victims 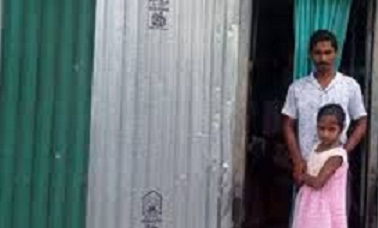 Over 6,500 non-tribal families were displaced due to armed insurgency and ethnic clashes in different parts of Tripura since 1980. Photo Credit - topindinews.com

Thirty-eight years after they were rendered homeless by ravaging ethnic riots and armed insurgency, Ranjan Das, Rabindra Banik, Laxmi Rani Biswas and others have found new homes at a rehabilitation colony in South Narayanpur of West Tripura. It was a humid Saturday in 1980 when Ranjan Das (now 50) fled with his family from Gabardi village in Takarjala block, 40 km from Agartala, to Sekerkote in West Tripura. Ethnic riots broke out on June 8.

A report appearing in the The Indian Express quoted Ranjan Das as saying, “I was around 12 years old. They started killing people in our village. My parents fled the village with me and took shelter at Sekerkote.” After running helter-skelter for a few years, his family returned to the ancestral village. However, a businessman was shot dead by armed insurgents at the village market in 1996 and non-tribal communities started fleeing the locality. “I had my elder brother and parents to look after the family when we moved out. Now they are no more and responsibility of the entire extended family has come upon me. We have been living in footpaths, villages and urban slums ever since. We have now got a new home in this colony,” Das further stated.

The report further stated that the erstwhile Left Front Government allotted them a colony of nearly 70,000 square feet area at South Narayanpur Village in Mohanpur sub-division of West Tripura in 2017. The colony was occupied by 55 refugee families this month. Every family was given entitlement of a small plot of 840 sq ft which has space for barely a small room and a makeshift toilet.

Over 6,500 non-tribal families were displaced due to armed insurgency and ethnic clashes in different parts of Tripura since 1980. Some of them were displaced more than once due to insurgency or development projects. Two hundred and thirty seven families among them were rehabilitated so far. The 55 families which got their new homes at Udbastu Gopal Colony, have their ancestral homes at Gabardi, Takarjala, Jampuijala and Mandwai villages, which faced the severe brunt of ethnic clashes.

Rabin Banik, 33, who fled his home as a child from Jampuijala Village in Sipahijala district, says his family has spent sleepless nights in the pavements of Agartala city after displacement from home. “We have lived in sub-human conditions in slums at Bitterban, Mullapara and have stayed on extremely low rent at Anandanagar, Chandrapur and other villages for years. I grew up without much education and have to fend off odd jobs. This new home is a much-needed relief,” he said.

Tripura experienced its worst ethnic riot between tribal and non-tribal communities in June 1980. The State is a land of mixed habitation comprising tribal and non-tribal, the latter mostly from Bengali communities. But just like the shade under a lamp, Tripura shares a chequered history of armed insurgency movement for over three decades. Organised insurgency in Tripura started shortly before 1980. The armed insurgency which originated from tribal groups, then struggling for identity and self-determination, started in full swing from 1980 onwards.

Dinesh Singh Committee, an inquiry commission set up by Ministry of Home Affairs (MHA) after the riots, found that 1,300 people were killed during the clashes. Unofficial reports, however, claimed 50,000 persons died in the riots. Rajesh Dey, 40, who hailed from Takarjala, said he was eight-years-old when his family left everything behind and fled for life in the face of insurgent attacks.

However, over three decades after his displacement, Rajesh says he is still afraid to return to his ancestral home. “Our lands were grabbed by occupants. Tripura now has much more peace than those turbulent days. There is no guarantee that such incidents wouldn’t repeat. We are afraid to return there,” he said.

Renowned writer and historical critic, Bikach Choudhury says in his famous article on the riots of Tripura that myths and misconceptions dominate any discourse on socio-political developments in Tripura over the past three decades. Choudhury also said that demographic imbalance entailed by the disastrous Partition of India in 1947, marginalisation of indigenous tribals by settlers and the “ethnic explosion” over the past three decades, is inevitably cited to oversimplify the interplay of complex socio-political developments and the State’s history.

On fear psychosis in returning to homes, Laxmi Rani Biswas said she tried to regain access to her family property at Jampuijala. She was faced by opposition by local occupants who grabbed her land. “There were a few tribal families who helped us to come back safely. Land issue is and always has been the main issue of discord,” she said.

Tutan Paul, another youth who lives in the colony, said his tin-shed room was flattened during a storm. He now lives inside a room of another occupant who is away on personal errands.

BJP vice-president Subal Bhowmik said his party would take steps to rehabilitate insurgency victims. “We have been with them since they were ousted. We shall try to help them in getting a normal life,” Bhowmik, who was previously with Congress, said.

After 25 years of CPI-M-led Left Front rule in Tripura, BJP stormed to power in alliance with Indigenous People’s Front of Tripura (IPFT) in the February 18 Assembly election this year.

Minister for Law and Minority Welfare Ratan Lal Nath said nearly 3 lakh people were rendered homeless due to insurgency across Tripura. Many of them have settled on their own accord but others are still hoping for Government-sponsored resettlement. While he was the leader of the Opposition, Nath had earlier demanded proper rehabilitation of all victims of displacement caused by insurgency.