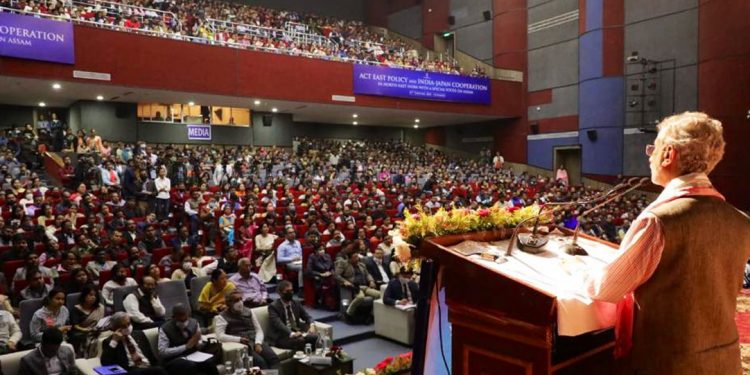 External Affairs Minister S Jaishankar on Monday said that poor law and order situation along the India-Myanmar border has resulted in delay in completion of the mega Kaladan project.

S Jaishankar who was in Guwahati, Assam on Monday said that the completion of the project is taking place because a stretch of the Kaladan project traverses through a logistically difficult part in Myanmar.

“Kaladan project taking time because it was in a logistically difficult part of Myanmar. We had to increase the road element of the project which was in Mizoram and the road building has been the cause of delay because of law and order challenges,” said External Affairs Minister S Jaishankar.

When being asked about whether the recent military coup in Myanmar would affect any developmental project between India and the neighbouring country, S Jaishankar expressed hope that the no project would be affected due to the coup.

Speaking further, S Jaishankar said that the Centre’s Act East Policy is aimed at boosting trade and economic activity in Northeast by connecting it with the other South Asian nations.

“Act East Policy is an approach to create connectivity between Northeast and countries like Myanmar and Bangladesh. It eventually push by road, sea, air to Vietnam & Japan. It won’t just be an economic activity but make Northeast more connected, energetic, contributing and employed,” S Jaishankar added.

“Act East must begin by giving the necessary attention and resources to our own States in the East and Northeast,” S Jaishankar added.

•Strong cooperation with Japan has made a difference to India, specifically to the development of Assam.

•Act East must begin by giving the necessary attention and resources to our own States in the East and North-East. https://t.co/d6Je9n0Ry7

“It is remarkable that within a decade, the India-Japan partnership is today seen in Asia, perhaps in the world, as most natural and close,” S Jaishankar said.

“Japanese Government can offer development assistance for necessary infrastructure. It’s up to Japanese businessmen to choose Assam for investment. They need to know Assam better to consider its potentials. Invited by other states too,” Japanese Envoy to India Satoshi Suzuki said.

A foreign policy that makes a difference to the lives of people.

At the JICA-funded Guwahati water supply project site along the Brahmaputra. Reviewing its progress along with the Japanese Ambassador @EOJinIndia pic.twitter.com/unxhaY4AUl