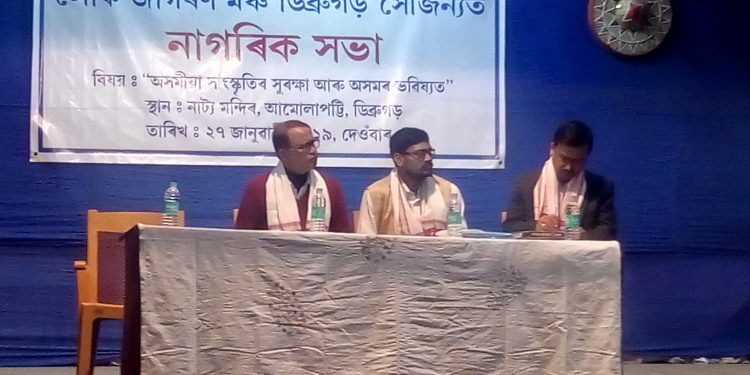 While participating in a citizens’ meet programme on Sunday organized by Lokjagran Manch of Dibrugarh at Amolapatty Natya Mandir, Barman slammed Akhil Gogoi for misguiding the people on Citizenship (Amendment) Bill.

He accused Akhil Gogoi of providing wrong information to the people on the citizenship bill.

“The Citizenship (Amendment) Bill 2019 will benefit the people of Assam. Due to religious persecution and facing tortures, the Hindu Bangladeshis have come to Assam and it is our duty to help them because they were forced to flee from Bangladesh after facing innumerable tortures from Bangladeshi Muslims. Their land and property were grabbed and even many Hindu women’s were brutally raped in Bangladesh,” Barman said.

He said the Clause 6 of the Assam Accord will provide a constitutional, legislative and administrative safeguard to the people of Assam.

A discussion was held on Assamese culture security and Assam’s future where leading citizens of Dibrugarh and AMCH doctors participated.

Bankim Sarma , an advocate of Guwahati High court said that the bill will not harm the Assamese society or its language because there is already an act called The Assam Official Language Act 1960 which will provide safeguard to the Assamese language.

“Through this bill, only 31,000 people will be benefitted. Some organizations are spreading wrong information among the people because they are not clear about the bill. The bill seeks to provide citizenship to non-Muslim migrants from Pakistan, Bangladesh and Afghanistan.”

A member of Lokjagran manch said they have organized the citizens’ meet to clear every point of the Citizenship (Amendment) Bill, 2016 because many have a misconception about the bill because some organizations are providing wrong information about the bill.

“We have organised the citizens’ meet in Diphu recently and similar meets will be organised in every district of Assam to create awareness on the bill,” said the organizer.

Debokarna Phukan, principal of Demow College also participated in the citizens meet and spoke about the bill.