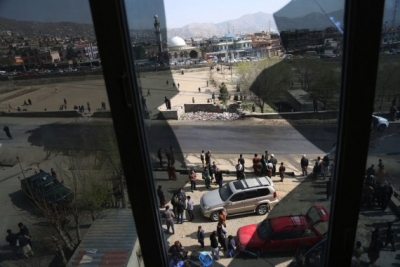 The death toll in the explosion that took place in Kabul on Saturday near a school has risen to 33.

Besides, 55 others who sustained injuries were admitted to different hospitals, according to Afghanistan’s Interior Ministry’s spokesman Tariq Arian, reports said.

Arian said that casualties — all of whom were civilians, most of them young girls — were likely to rise.

He confirmed that an explosion occurred at 4.27 p.m. near a school in Dasht-e-Barchi, a Shia-Hazara-populated area of the Afghan capital.

Arian said the area has been cordoned off by police, without giving further details.

It was not immediately clear what caused the explosion.

There was conflicting information about the possible cause, with some local media outlets initially reporting three blasts caused by rockets, while other reports suggested the explosion was caused by a car bomb.

Emergency, a non-governmental organisation, tweeted that one person who died and 26 people who were injured had been brought to a hospital that it runs in Kabul.

It said the victims were almost all girls between the ages of 12 and 20.

There were fears that the death toll could rise further. Journalist Bilal Sarwari tweeted that at least 53 people had been killed and more than 150 were injured.

After the incident, many took to social media to condemn the killing of the civilians.

No group has claimed responsibility for the explosion as of yet.

Both the Taliban and Islamic State militant groups are active in Afghanistan.

The Taliban denied that it was involved. However, an Interior Ministry spokesperson tweeted that the Taliban was undoubtedly behind the attack.

President Ashraf Ghani also blamed the Taliban. The group had again showed that it was not only unwilling to resolve the crisis peacefully but would rather sabotage the peace process, a statement from the presidential palace said.

The Afghan government has been in peace talks with the Taliban since September of last year, but these have stalled.