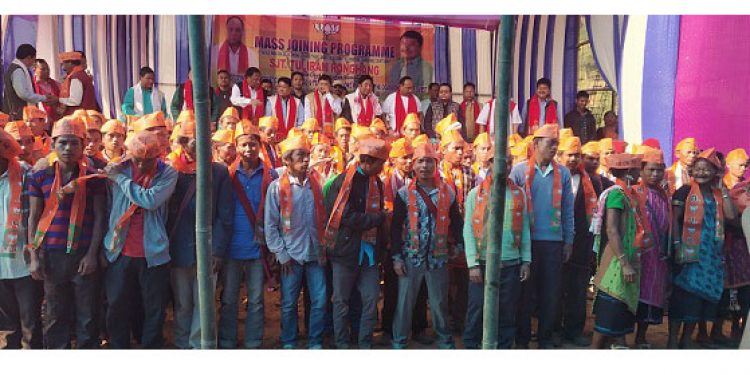 A section of people who joined the BJP on Monday. Image - Northeast Now

Dera Arlok, 110 km from here, in West Karbi Anglong in a mass joining ceremony of opposition workers into the BJP fold, the KAAC CEM said, “In the national Executive Committee, the BJP national president talked about a Congress-mukh Bharat and bring all people into the BJP fold. (Amit) Shah has emphasised that local BJP committees should bring in at least 10 persons into BJP and MAC (Member of Autonomous Council) Mangal Sing Timung has done exactly that.”

Talking about the issue of deplorable road communication in the district, Ronghang promised that roads in West Karbi Anglong would be improved very soon. More than 19 weather roads would be taken up for improvement; roads will be blacktopped within one year.

Roads in Dera Arlok and the bridge over Amlong River will be repaired. Roads in Chinthong will also be improved, he said.

He urged villagers to check on groups or parties demanding money from contractors which obstruct development works.

A total of 108 families who were earlier supporters of Congress and Autonomous State Demand Committee (ASDC) joined the BJP in the joining ceremony. Among the prominent leaders joining BJP are Mohon Kathar, Congress candidate in last MAC elections from Hamren MAC constituency and Mohon Terang.

Hamren MAC Mangalsing Timung, welcoming the new comers into the BJP, said, “We are not selfish and with open hearts, we are welcoming those who are yet to join the BJP. The KAAC election is over and  as our mind is open we still accept people into the BJP.”

He claimed that under BJP there is development everywhere which did not happen under the Congress. Timung asked BJP workers not to differentiate between ‘new’ and ‘old’ BJP workers, but to work together for the interest of the party.

Agricultural equipment from the Agriculture Department were also distributed in the meeting.