The 6th edition of Interdepartmental Football Tournament 2018 was kicked off at Paljor Stadium on Tuesday. 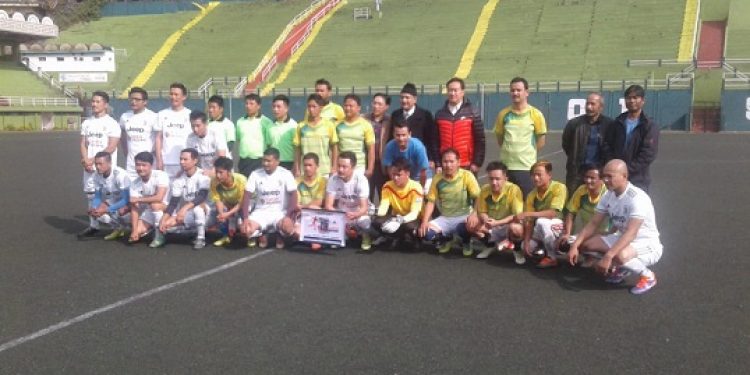 The 6th edition of Inter-Departmental Football Tournament 2018 kicked off at Paljor Stadium in Gangtok on Tuesday. Photo: Sagar Chhetri

The 6th edition of Interdepartmental Football Tournament 2018 was kicked off here at Paljor Stadium on Tuesday. The 15-day long tournament on the theme ‘The Glory of the Game Lies in Participating Not in Winning’ is being organised by Boys’ Club of Gangtok, one of the popular and oldest football clubs of Sikkim.

The second match of the day between Sadar Thana and Health Department ended in goalless draw.

On Wednesday, the first match will be played between Block Administration Centre and Rural Management & Development Department. Land Revenue Department will take on Energy & Power Department in the second match.

A total of 22 teams have participated in this league-cum-knockout tournament. Teams have been divided into seven groups having three teams in each group except for group A which has four teams. In the end of the league round, only the group topper will be qualified for the quarterfinal round on knockout basis. The final match is scheduled to be played on December 7. The tournament carries the cash prize of Rs 1 lakh for the champion and Rs 50,000 for the runners-up.