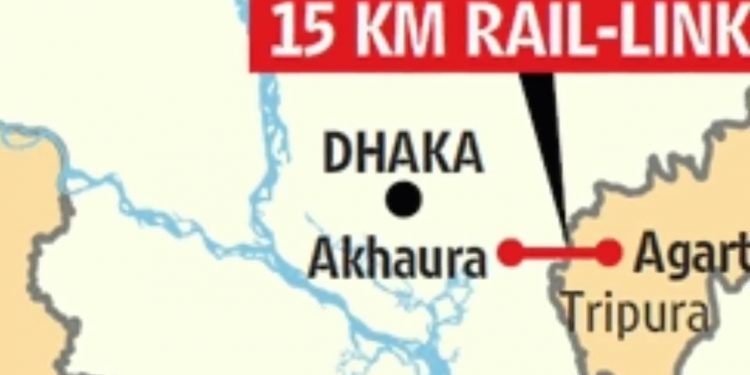 The proposed Agartala-Akhaura rail project is likely to miss the expected deadline with the construction agency facing some problems on the ground level.

According to reports, the development came to light at meeting between a six-member team led by the Joint Secretary in the Ministry of External Affairs (MEA), Namgya Khampa, and State Government officials in Agartala on Tuesday.

In the meeting, a threadbare discussion on the 15-km Indo-Bangladesh railway project took place, during which the construction agency highlighted the hurdles in the execution of the project.

Land meant for the project is a major problem as some houses were built before beginning of the construction works, said an official who attended the meeting. Besides, some issues relating to drawing and design also came up in the meeting.

After giving a patient hearing, the joint secretary of the MEA asked the construction agency, IRCON, to speed up the works on railway tracks and said that additional funds would be provided if necessary. Khampa also sought the State Government’s cooperation in regard to the land issue.

As per the detailed project report, a sum of Rs 580 crore will be spent on laying tracks from the Agartala Railway Station to Nishchintpur, while an amount of Rs 392 crore will be required for the tracks on the Bangladesh side.

The North Eastern Council (NEC) and the DoNER will fund the project on the Indian side, while the MEA will release funds for the Bangladesh part. The ambitious railway project is scheduled to get completed by March 2020, which now seems difficult taking into account of the current problems.