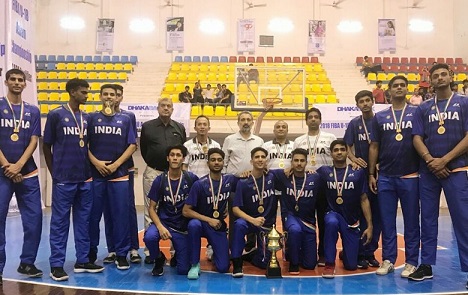 Indian junior basketball team under Mizo coach H Laldinsanga win all the matches in the South Asian Qualifying round of the FIBA U-18 Asian Basketball Championship in Dhaka. Photo: Sangzuala Hmar

Indian junior basketball team under Mizo coach H Laldinsanga won all the matches in the South Asian Qualifying round of the FIBA U-18 Asian Basketball Championship in Dhaka.

Basketball Federation of India (BFI) appointed H Laldinsanga as the coach of the junior Indian men’s team one month back after he served as the assistant coach for the senior national side.

The Indian team will contest the FIBA U18 Asian Championship 2018 slated to be held in Thailand from Aug 5-11. The former Indian national team player H Laldinsanga is the coach of the Indian junior team which won all their games in the qualifying rounds held in Dhaka.

Mizo coach H Laldinsanga, the first Northeastern to have led the Indian basketball team thanked the Basketball Federation of India for giving him the chance to lead the Indian junior team. “I have to personally thank Chander Mukhi, the secretary general of BFI for putting his trust on me and giving me the opportunity,” H Laldinsanga said.

Mizoram Basketball Association (MBBA) Technical Committee Chairman Dr Lalrinawma Hnamte said H Laldinsanga’s achievement has not only made the nation proud but also Mizoram, which according to him is a very young entrant in the basketball scene of India.

“I was personally asked by the BFI technical people where my comfort zone was, I told them I was interested in nurturing young talents in the country,” H Laldinsanga said.

Laldinsanga has been around the basketball scenario of India, he was the vice captain of India Junior team in 2004 and made it to the senior national side in 2005.