The advertisement of India Investment Grid

The India Investment Grid has come up with an advertisement showcasing Assam tea.

Through the online advertisement it is inviting investors to the tea sector of Assam.

‘With a total area of 312,210 hectares under tea production, #Assam contributes 50 per cent to India’s total #tea production!

Explore #investment opportunities in the state on #IIG at http://bit.ly/IIG_Assam.’

But what is blatantly shameful is that the picture of the tea garden is not of Assam.

Anyone can make out that it is not a tea garden in Assam at first look of the image.

The blatant error of IIG is doing the rounds in social media platforms. 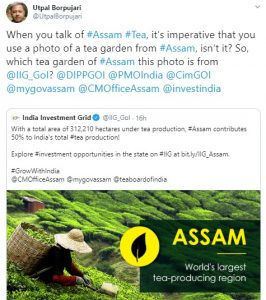 ‘When you talk of #Assam #Tea, it’s imperative that you use a photo of a tea garden from #Assam, isn’t it? So, which tea garden of #Assam this photo is from @IIG_GoI?’

The India Investment Grid (IIG) is an online platform developed by the Government of India to showcase investment opportunities across the country.

So it was expected that those at the helm of affairs at IIG should have been extra careful in choosing an image of a tea garden in Assam.

Images of Assam tea are abundant if one browses through the internet.

Any school going child would have come up with an authentic picture of tea garden in Assam.

Such blunders show the apathy and sincerity of giant organizations like IIG while inviting investment or their knowledge of Assam and the Northeast.