Impact of climate change on potters of Majuli 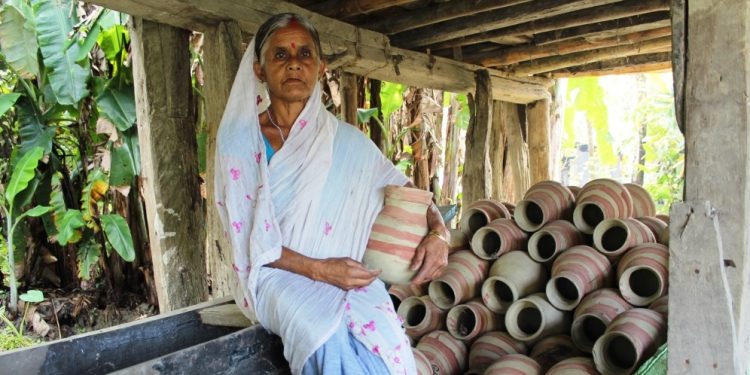 A woman potter of Salmora in Majuli. Image arrangement by author

Sarumai Borah is getting her hands soaked in cold water and mud-clay despite being suffering from the severe problem of wet-nose.

What she is doing is to make pitcher pots to pay off her debts she owes to a money lender across the big river. She borrowed Rs. 20,000 for the marriage of her eldest daughter last winter.

“I have been paying the interests of her loan for the last eight months”, moans Sarumai, adding “and I must return the principal amount to the lender before the monsoon.”

Onset of monsoon makes her village Salmora inaccessible in Majuli – the largest river island of the world on the Brahmaputra. But the continuous rain since last week of April this year is hampering her pitcher pots getting dried in the sun.

Besides suffering from common cold, whose treatment is even very scarce in the river island for poor healthcare facilities, Sarumai Borah has to work since early in the morning under the floor of her raised house constructed because of annual flood hoping for the sun to come out.

Besides the unusual weather affecting the Brahmaputra valley in the foothills of eastern Himalayas the river has also been causing problems to potters like Sarumai Borah eroding the banks where the mud-clay for their work is extracted.

Sarumai Borah belongs to the community of traditional potters locally called kumars that has been engaged in that profession for the last six hundred years. The loss of agriculture lands to flood and river bank erosion every year has already transformed the kumars in Majuli totally redundant of any agriculture work for many years and pottery is the only means of their livelihood.

Climate change is visibly crippling the livelihood activities of the kumar communities in Salmora and Bongaon areas of Majuli on its southern banks with the Brahmaputra.

The great river which originates in Angsi glacier of Himalaya in Tibet has been flowing with heavy amount of silt every year. The melt in the glacier in Tibet surges its water level during the monsoon which has turning increasingly irregular and late.

The carrying of silt, as experienced in all rivers across the region, makes one bank deposited with heavy amount of sediments and sands making the river course to turn and smash the bank on the other side. In Bongaon and Salmora thousands of hectares of land has been eroded this way in last one decade or so.

Watching the struggle of Sarumai to dry her moulded pots in 220 Celsius under an overcast condition and rain is Bikas Hazarika (32), a fellow potter who has training on pottery in 2002 sponsored by state government in Belgaum, Karnataka. Pointing towards the Brahmaputra Ratul tries to locate his original home now two kilometres away from the banks in the water.

“Since my childhood I have seen our home being sifted seven to eight times due to the erosion by the Brahmaputra” recalls Bikas while trying to give an account of the impact on the Kumars in their livelihood activities by the fast approaching river.

The rise in water level during peak monsoon period swells the Brahmaputra to overflow flooding its bank areas like Salmora and Bongaon in Majuli.

Considering the immense socio-cultural importance of the river island of Majuli – a centre of neo-Vaishnavite tradition and practice of Assamese Hinduism, the State Government with massive financial aid from the union government has launched various river management projects to control the flood and erosion by the Brahmaputra.

But these river-bank protection works have now becoming another barrier for the Kumars to sustain their traditional livelihood activity of pottery.

Riverbank erosion is one of the major natural disasters of Assam on the sub-Himalayan foothills in the north eastern India   and an issue of major concern. It causes untold miseries to thousands of people every year living along the banks of rivers in the Brahmaputra valley.

To date, erosion alone has rendered millions of people homeless and has become a major social hazard. People, who live near riverbanks, become victim of erosion which forces them to change their livelihood and community. Most of the victims of riverbank erosion comprise the bulk of the internally displaced people in Assam.

In Majuli they amount to several thousand families. The kumars of Majuli have been hit hard by the flood and erosion of the Brahmaputra compounded by climate change in recent years.

The state Water Resources Department (WRD) along with its partner agency the Brahmaputra Board has been laying rock spars on the banks of the Brahmaputra River in Majuli to check its erosion.

The agency has so far laid four stretches of rock spars on the banks of the great river that flows past the Bongaon and Salmora areas of Majuli. The WRD has also been engaged in laying geo-mates and geo-tubes filled with sand as a part of its bank protection drives off the river in Majuli.

These bank protection measures appear successful albeit leaving the kumar community unable to access to the clay for their traditional product. The finest clay for their work, called kumar Mati (clay of the potters) is found in the river bank areas of Salmora. As the river banks are now being covered by rock spars and geo-mates or geo-tubes, the kumars are finding it extremely difficult to collect the raw material meant for their products.

“We cannot oppose the rock spars or the geo-mates in the river bank as they protect Majuli from the annual havoc of flood and erosion. But for this we are being deprived of extracting the clay meant for our work,” says potter Bikas Hazarika.

“Recently we have started bringing a similar kind of clay from Sivasagar and Dhekiakhowa in Jorhat district, but it is not cost effective”, calculates Bikas.

Another potter of the village Deepali Borah (35), who earlier used to make one thousand pitcher pots annually, says, “There is one more variety of clay that still found here, but it is not sift enough to make bigger pots meant for fetching water.”

The pottery of Salmora requires a finest quality of soft and sticky clay dug out forty feet deep in the ground. For this clay extraction, the river bank areas of Salmora have been the endemic zones for the Kumars for last six centuries.

The extraction usually takes place during the month of February-March in which wells are dug in circular forms sending men to extract or mine the clay manually. After that the extracted clay is stored five feet underground for some months so that it undergoes certain chemical process.

The metamorphic clay then is taken out, dried in sun and prepared to mould into different sizes and shapes for various forms of traditional pots like kalah (pitcher to fetch water), tekeli (smaller pitcher to keep curd or locally brewed liquour), nadiya (a large pot) choru (a pan to cook rice), bhuruka (a small pitcher) etc.

The burning of the pots begins during the month of August-September and they are readied for transportation by the month of November. The male members of the kumars of Salmora load their pottery on two hundred boats in average and take the riverine routes through Subansiri, Dikhow, Dihing, Disang and Dikrong tributaries of the Brahmaputra.

All the traditional buyers of pottery of Salmora are Mishing and Deori tribes of Assam that live in these riverine areas as they keep their rice beers in these pots. The kumars embark on this business trip for two months up to mid-January collecting the newly harvested rice paddy from these tribes in exchange of their pottery—thus continuing an age old barter trade in the process.

As climate change is threatening a century old livelihood activity of traditional artisanship in of Majuli resilience seems to be the only way out for the sustainability of the Kumar community living on the midst of a great glacier river.

Farhana Ahmed is Northeast Now Correspondent in North Lakhimpur. She can be reached at:[email protected]