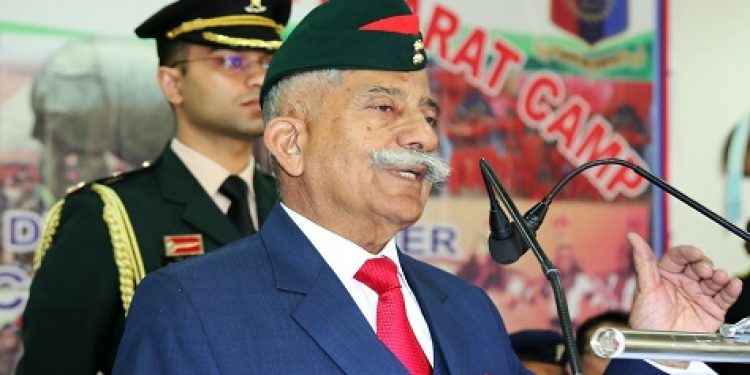 Addressing the ‘Ek Bharat Shreshta Bharat’ camp organized by the NCC Additional Director General of North Eastern Region at Tezpur University in Tezpur of Assam’s Sonitpur district, the Arunchal Governor said that, NCC is an important institution which has been instilling nationalism, patriotism and spirit of ‘nation first’ amongst the young students.

Recalling his first NCC Camp of 1955, in which he received the Best Social Service award, the Governor said that it was the beginning of his life of punctuality and discipline. He said that NCC helps in character building, motivation, secular outlook, camaraderie, leaderships along with discipline and punctuality.

“It inculcates self-discipline, obedience, sincerity and determination amongst the cadets,” the Governor said.

Stating that Prime Minister Narendra Modi was also a NCC cadet, the Governor advised them to follow the guiding principle of their organization to rise in life.

NCC cadets must personify the motto of National Cadet Corps, which is ‘Unity and Discipline’, he said.

The Governor advised the cadets to have self-pride and self-respect.

“Cadets must study hard and also think, believe and act for the Nation,” he said.

Earlier on his arrival at the camp, a Guard of Honour was presented to the Governor commanded by seniors under officer Vanisha Dutta.

The Ek Bharat Shreshta Bharat camp aims to provide opportunity for understand the cultural diversity, history, flora and fauna and its people. It also aims to create awareness amongst the cadets regarding diverse cultural heritage of the country.

The camp at Tezpur University, which is being organized from January 1-12 has 600 cadets including 100 from Uttar Pradesh, and the rest from all eight groups of the north-eastern region.