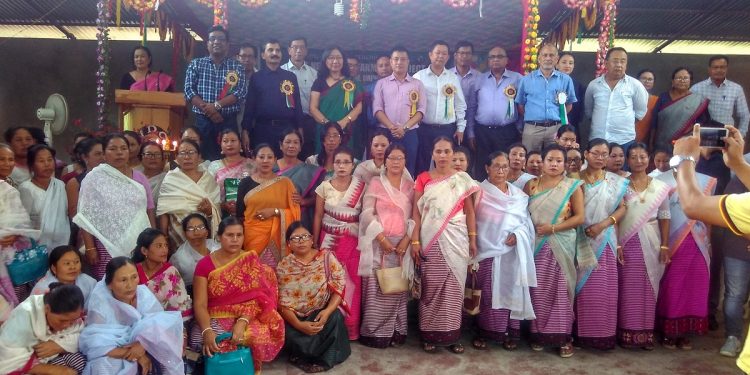 The first-ever female farmers’ project under Indian Council of Agricultural Research-northeastern hill region has been launched at the greenery filled Khurkhul village in the outskirt of Imphal in Manipur on Thursday.

The project was launched by Sekmai MLA and deputy chairman Heikham Dingo Singh of Manipur State Planning Board at Khurukhul Awang Leikai Community Hall, 20 km north of Imphal in presence of director level officers of various state and central institutions.

Speaking on the occasion, Sekmai MLA Dingo appealed to the local women folks who are taking up the initiative and local clubs in the State particularly in his constituency which is located in the Imphal West district to promote tree plantation and it’s conservation to meet the challenges of climate change as the issue becomes a serious one in the agriculture sectors.

Lauding the activities of the local Self help groups(SHG) of Khurkhul and Kanto areas for taking up such kind of income generation activities and terming it as a ‘New beginning’, the local MLA also appealed to work hard so that other neighbouring villages can replicate the initiatives in their respective areas as well.

In his address, principal scientist Dr S Hazarika who is the nodal officer (Tribal Sub-Plan & Scheduled Caste Sub-Plan) of ICAR-Regional centre-NEHR, Meghalaya said the such projects are being taken up to empower the farm Women Through Income Generating Agriculture and Allied Activities in the states of Tripura,Manipur and Meghalaya where there is Scheduled Caste population.

The technical support and skill development programmes besides the basic inputs such as fertilizers, piglets,bee box etc will be given to the women folks of the SHGs, he added.

Giving key note address, Senior Scientist Dr S S Roy who is the nodal officer (Tribal Sub-Plan & Scheduled Caste Sub-Plan), ICAR Research, Complex for NEH Region, Manipur Centre, Imphal said that the project is first of its kind in the north east and expressed the confidence that the female farmers of the village which have more than 2700 households will take up various income generating activities for a better livelihood.

Director Dr N Ranjana Devi of ICM, deputy general manager Dr Ravi of NABARD, Director Narendra Prakash of ICAR,MD A Subhas of MSCB also spoke on the occasion which was attended by the womenfolks of the khurkhul and kanto villages.

About 180 women members of 18 SHGs will be participating in the female farmers’ project.