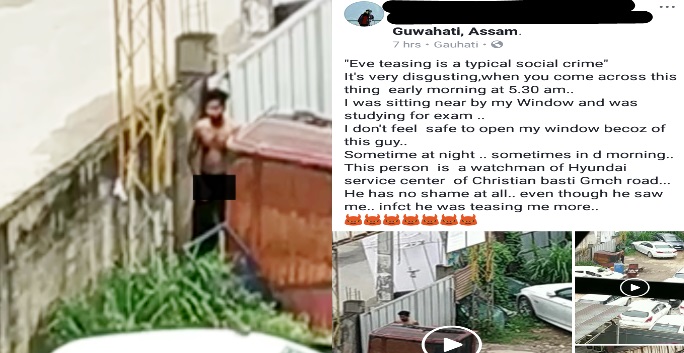 The incident has come to light after the girl posted the photograph of the incident on her Facebook page. The accused is a watchman of Hyundai Service center of GMCH road, Christian Basti in Guwahati.

The girl decided to upload the photograph on Facebook to have proof against the pervert. She recalled how the watchman of Hyundai Service center of GMCH road, Christian Basti was making obscene gestures standing in front of her residence.

The girl wrote on her Facebook page, “Eve teasing is a typical social crime. It’s very disgusting, when you come across this thing early morning at 5.30 am.. I was sitting nearby my window and was studying for exam …. I don’t feel safe to open my window becoz of this guy.. Sometime at night ….. sometimes in d morning.. This person is a watchman of Hyundai service center of Christianbasti GMCH road.  He has no shame at all.. even though he saw me.. in fact he was teasing me more.”