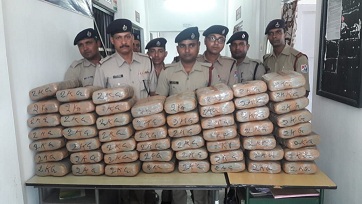 Acting on a secret tip-off, the Jirania sub-division police recovered a huge quantity of ganja on Thursday which was hidden in a secret chamber by drug peddlers. The secret chamber was under a concrete bridge in Joynagar village in West Tripura.

The police with the help of the Central Reserve Police Force (CRPF) personnel took out from the secret chamber around 180 packets of ganja each weighing around five kilograms. Though the exact weight is yet to be ascertained, but sources said that the seized consignment’s market price is around Rs 60 lakh.

The Tripura Police has been third time successful in their operations against drug peddlers.  In yet another incident, police of Sonamura sub-division raided a house and found “huge quantities” of ganja hidden in several barrels.

According to police, Tripura is the route from which ganja is smuggled to Bangladesh and other North Indian States.

Earlier, two youths from Bihar were arrested with large quantity of cannabis (ganja) from an AC coach of Tripura-Sundari express at Agartala Railway Station on Thursday afternoon, police informed.

During two separate search operations, police recovered a total of 11 bags containing 108 packets of ganja weighing 165 kilograms, the market value of which is said to be about Rs 10 lakh.

Police sources added that the first operation was carried out at about 1.30 am in a platform of Agartala Railway Station wherein police recovered 7 bags containing 55 packets of ganja weighing 110 kilograms, which has a market value of Rs 6.6 lakh.

In another operation, at around 2 PM, police arrested two persons from AC coach No B-2 of Tripura-Sundari Express and seized 4 bags containing 53 packets of 54.9 kilograms of ganja (cannabis) from their possession, which has a market value of Rs 3.4 lakh.

The arrested persons have been identified as Lalindra Kumar alias Dharmendra and Suresh Ray – both belonging to Vaishali district of Bihar. Police arrested both the youths under the Narcotic Drugs and Psychotropic Substances Act, 1985 (NDPS Act).