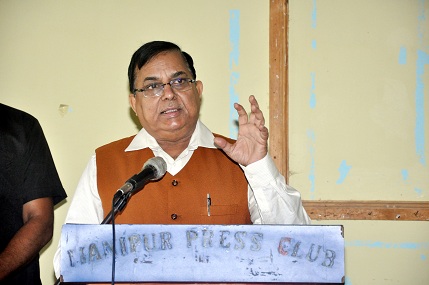 Manipur University Vice Chancellor Prof Adya Prasad Pandey, who was on leave, has been suspended by the Union HRD Ministry.

An inquiry into allegations of irregularities against Prof Pandey has been going on.

As per the order, issued by the HRD Ministry on Monday, which was made available here on Tuesday, the suspension of Prof Pandey will remain effective until the probe against him is completed.

According to the order issued by Deputy Secretary Surat Singh of HRD Ministry, the President of India in his capacity as visitor of the Manipur University on consideration of material on record and taking into account volatile law and order situation in the campus of the university & in exercise of powers conferred on him under provisions of statute 13(1) of the statute of the Manipur University Act 2005, has placed Prof Pandey under suspension with immediate effect.

As per the order, action would be taken in the interest of the justice for free and fair inquiry.

It may be mentioned that Manipur University was in a “state of turmoil” due to long drawn agitation by students, teachers of university, the order said that the Government of Manipur has informed that agitation against Prof Pandey had led to series of law and order problem and administration crisis in the State.

A two-member inquiry committee headed by Retired Justice T Nandakumar was set up on August 17 with a view to resolve the crisis in the University campus through a HRD Ministry order.

As a result the agitation in the university was temporarily ended on August 22 after a period of 85 days and the Manipur University started functioning from August 23 with Prof Pandey proceeding on leave.

However, the report of resuming duties by Prof Pandey (from September 1) further deteriorates the atmosphere of the University, the order added.