HPCL workers are disappointed with the government’s proposal of clearing three month’s salary to them. Recently Union Minister of State for Heavy Industries and Public Enterprises Babul Supriyo announced on twitter that pending salaries of three months will soon be paid to the employees working at the Hindustan Paper Corporation Limited (HPCL).

HPCL workers are not happy with the arrangement and they are of the opinion that payment of just three month’s salary won’t help them much. 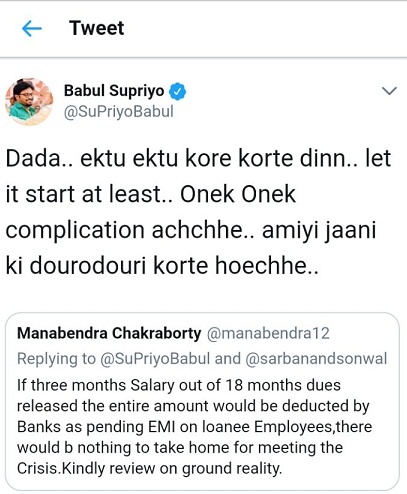 Speaking to Northeast Now, President of Cachar Paper Project Worker’s Union (CPPWU) Manabendra Chakraborty, said, “HPCL workers have not received salaries for almost one and half year. 18 month’s salary is pending for workers of Cachar Paper Mill and for Nagaon Paper Mill, it is 16 month’s salary. In this scenario, how much we will be benefitted from three month’s salary? The workers have been forced to take loans from the bank to keep their kitchen running. As soon as the salary will be paid, it will be attached by the bank and the employees will get nothing. Also, we oppose the government’s move to privatise the mills because that will mean rapid job cuts.”

He said that he had informed the minister about this situation in twitter to which the minister responded that let the process get started at least.

“After Supriyo’s tweet, I informed him that if only three month’s salary is paid, it would be deducted by banks as pending EMI on employees who have taken loans. Against that backdrop, the employees would get nothing.”

Babul Supriyo replied to Chakraborty on twitter, “Dada, let it start at least. There are lot of complications. I only know how much I have to run around for this.”

Meanwhile, after a meeting with the Federation of Registered and Recognized Unions, HPCL, HPC MD Sashikant Jain said, “It has been decided that three month’s salary will be paid to the employees in March. Remaining of the salary will be cleared in a phased manner. Also, the mill won’t be completely privatised. It would function in a PPP mode. Investment will be made by the private sector but the employees will get their salaries from the government. From April, the tender process will start.”